The Hantman lab investigates how top-down feedback affects sensory processing. In particular, we are interested how cortical output influences proprioceptive streams in the brain. 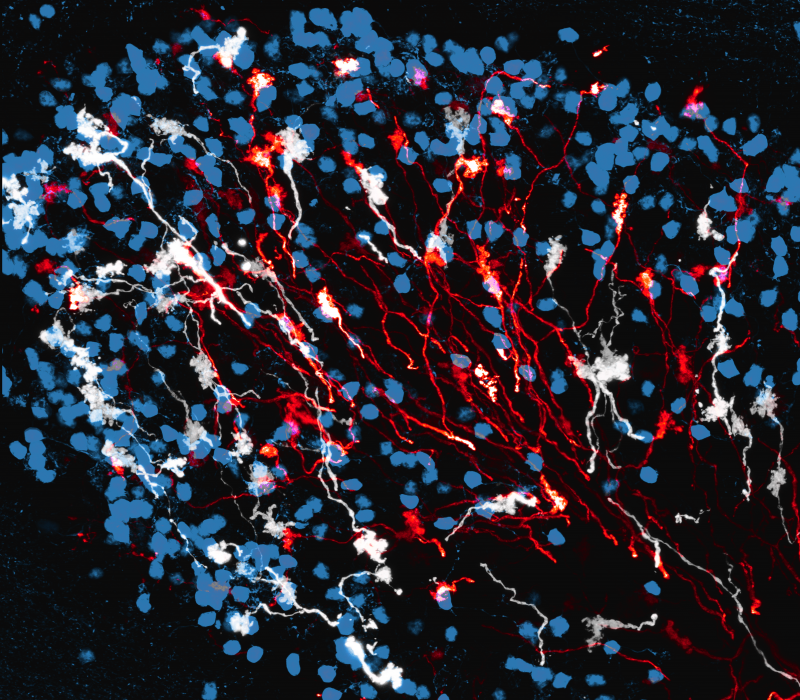 Voluntary movement results from a goal-based decision and a process that converts the goal into relevant motor commands. Planning and executing appropriate motor commands depends on learning the relationships between motor commands and physical consequences. Once command-consequence relationships are learned they can be used to predict the sensory consequences of the movement (forward model). Such predictions can be utilized before execution for planning purposes, and during execution can be compared with sensory information to determine differences between intended and actual movement. The resulting error signals can then serve to inform corrective actions and to train the forward model. By enabling planning and performance-tuning, predictions allow the brain to achieve skilled movements. While strong evidence exists that motor control (and perhaps aspect of cognition) depends on predictions, the network and cellular mechanisms of prediction generation and utilization are largely unknown. To reveal the logic of how predictions are made and used to control movement, the Hantman lab is developing the capability to identify, monitor, and selectively manipulate elements of motor control circuitry.

A central framework of our lab is that predictions of the consequences of motor commands are used in conjunction with sensory information to achieve motor control (Figure 1). Predictions are necessary for the following reasons. First, when preparing a sequential action, the brain needs to estimate the outcomes of earlier steps to plan later components of the behavior. Second, because peripheral pathways impose temporal delays that outdate sensory information, the current position of a moving animal can only be estimated internally. Lastly execution errors can be calculated by comparing predictions against the actual (albeit delayed) sensory information related to the movement. Predictions of current and future body positions are constructed by converting copies of motor messages (corollary discharges) into sensory consequences using learned forward models. Learning necessarily occurs in brain areas where motor commands and sensory information converge. We are dissecting the neural circuitry that generates, carries, and utilizes sensory predictions relevant for motor control. 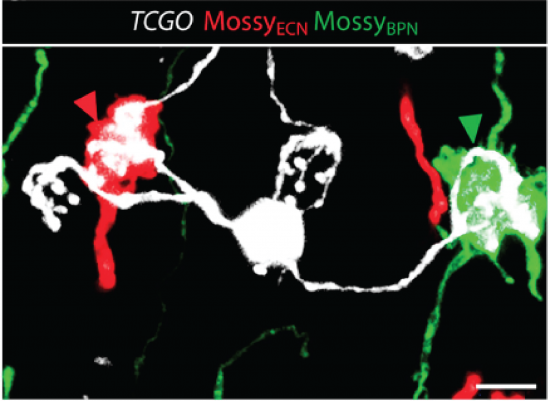 Convergence of BPN and sensory inputs in cerebellum suggests a model of current position prediction as shown in Figure 1b. In our working hypothesis, a movement generates sensory and motor-related inputs that activates a subpopulation of granule cells. Downstream circuits learn this granule cell activity pattern and use it to represent that movement. If the BPN is sufficient to recreate the same downstream effect, these motor-related inputs will generate a representation that would predict the sensory consequence of that action. Since these BPN-dependent representations are not dependent on sensory information and thus do not incur peripheral delays, they could provide an accurate estimate of the current or future positions, useful for planning actions.

BPN inputs to proprioceptive regions of cerebellum may also be involved in error detection. In our model, BPN inputs generate a representation of the sensory consequences of intended movements in the cerebellum. Since errors are differences between intended and actual movements, these BPN-dependent representations could be used to cancel consequent proprioceptive information. Non-canceled inputs would be preserved and interpreted as errors or unrelated to the motor output.

The Hantman lab is testing if the BPN provides the motor-related information necessary to generate predictions and detect errors. To test this hypothesis, we have developed a multifaceted experimental system that takes advantage of the genetic toolbox available in the mouse. With this platform–centered on a multi-step reaching task–we seek to answer three questions.

1) Is the BPN necessary for motor control and planning? We, for the first time, selectively perturb the BPN during a motor control task.

3) What is the nature of information carried by the BPN? We are characterizing BPN inputs and their transformation through the BPN during behavior.