Because of the nervous system’s privileged role for controlling behavior, the neurobiology of appetite is key for understanding how procurement and ingestion of food is regulated. Over the past several years, new tools for cell type-specific neuron activity monitoring and perturbation have enabled increasingly detailed analyses of the mechanisms underlying appetite-control systems. Three major neural circuits have been identified that strongly and acutely influence appetite but with notably different characteristics. Although these circuits interact, they have distinct properties, and thus they appear to contribute to interlinked processes influencing appetite, thereby forming three “pillars” of appetite control.

(1) The first pillar involves the Agouti related protein-expressing (Agrp) neurons in the hypothalamic arcuate nucleus (ARC). These neurons elicit food intake, and, when activated, they also transmit a negative valence signal that may correspond to the unpleasant feelings attributed to hunger. AGRP neurons increase their activity during energy deficit, and a reduction of AGRP neuron firing is reinforcing. Despite the fact that external optogenetic or chemogenetic activation of these neurons drives food intake, they are normally rapidly suppressed just as food consumption commences, and thus are primarily involved in food seeking but are less likely to normally drive food consumption.

(2) The second pillar is comprised of circuits tied to consummatory behaviors that also mediates positive reinforcement, likely involving the lateral hypothalamus (LH). These circuits drive food consumption and are rewarding. Recordings from the neurons in the LH show diverse activity patterns that encompass multiple phases of food seeking and consumption.

(3) The third pillar involves Calcitonin gene-related peptide (CGRP) neurons in the parabrachial nucleus (PBN) which potently suppress eating when activated, but these neurons do not increase food intake when inhibited. PBN-CGRP neurons are activated by signals associated with food intake, and they provide a signal of satiety that has negative valence when strongly activated.

At a first approximation, these three systems appear to fit together in a roughly sequential manner.

The lab’s research is directed towards identify the cell types that mediate these distinct appetitive processes. This relies heavily on deep-brain imaging as an unambiguous measure of the timing of neuronal dynamics. In addition, we compare multiple behavior states during imaging of the same animals so that we can contrast the role of neurons in hunger, thirst, and fear to assess the behavioral state specificity of the dynamics that we measure.

We found that we could ‘hack’ the hunger system in mice by cell-type-selective activation of a molecularly defined hypothalamic population called AGRP neurons. Cell type-specific AGRP neuron activation induced a virtual starvation state even in well-fed mice, eliciting voracious eating within minutes. The amount eaten was proportional to the level of activity in AGRP neurons, and the motivation was specific for consumption of food over water. This showed that AGRP neurons could serve as an entry point for studying a goal-directed motivated behavior.

Because AGRP neurons are a single population that is sufficient to elicit intensive food-seeking behaviors, the axon projections of these neurons are well-suited to identify other hunger circuit nodes. We have discovered several circuits that induce robust food consumption. We have also developed new methods for synaptic silencing to explore the neural circuits underlying appetite as well as other need states.

Using electrical activity manipulations of AGRP neurons and deep-brain calcium imaging, we found a motivational mechanism for hunger that contributes to the difficulty of maintaining weight loss on a low calorie diet. We showed that AGRP neurons mediate food-seeking behavior  by signaling the unpleasantness (i.e., negative valence) of hunger. Our imaging and neuron perturbation experiments indicate a new learning rule for homeostatic need states, where starvation-sensitive AGRP neurons motivate behavior by a negative valence signal. Inhibition of this pathway is mediated by food and is rewarding; consequently, food-seeking behavior is selectively reinforced in hunger over behaviors that don’t provide nutrients. AGRP neurons are the first neuron population found to elicit appetite by mediating the unpleasant aspects of hunger. Interestingly, we discovered that a different set of neurons, which elicit thirst, also transmit a negative valence signal. Thus, this mechanism appears to be generalizable to another need state.

To bridge the basic science of neural circuits with therapeutic strategies for obesity and eating disorders, we have used  methods for cell-type-specific transcriptomics of AGRP neurons and another important population called POMC neurons. We have identified several receptors, ion channels, and neuropeptides that increase or decrease appetite as well as hundreds of other candidates for appetite-regulatory pathways. Using these molecular control points for AGRP neuron activity may ultimately be important for developing non-surgical weight loss strategies, which would have important societal impact to counteract obesity. 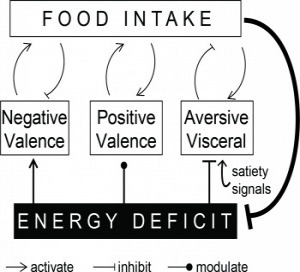