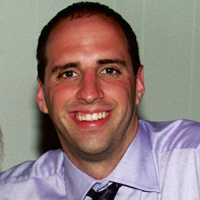 The backstory of my career does not involve a life-changing experience resulting in an obsession with sensory processing or proprioception.  Rather, the underpinning of my scientific ambitions stems largely from my experiences with a collection of influential teachers and instructors.

I was a terrible student until the third grade. I wish I could claim that during that period I grew thirsty to understand the world and began to apply myself, but actually my educational savior was a brilliant teacher named Ann Chick. Mrs. Chick taught remedial level classes in my elementary school and I was one of her students. And although I have never known why I was singled out, that year Mrs. Chick decided that I would no longer be allowed to be a poor student. Each day after school, I would return to Mrs. Chick’s classroom where she tutored and encouraged me through a series of aptitude tests. Within that year I ascended to the highest level classes in every subject area. But more important than the material I was taught, Mrs. Chick made me believe I was capable of learning anything.

While middle school itself was quite intellectually uneventful for me, the summers were instrumental to my eventual career in science. Following a precedent set by my brother, I joined a summer program called Project Oceanography in Groton, Ct. I had always loved the sea and this seemed to be a great way to spend a couple weeks on a boat. During this program, we designed and carried out our own experiments and even wrote small papers about our research. Besides some wonderful memories on the water, this experience taught me about the unique mixture of creativity and logic inherent to the scientific process. Unfortunately, I also learned that I was a terrible marine biologist as I was unable to come up with a single inspired idea while at Project Oceanography.

In search for a subject that fit my mindset, I took all the science classes I could throughout high school and college. Finally, in an advanced physiology class taught by Donald Leary at Providence College, I found my scientific niche. To tell the truth, I was not convinced by the class, but rather by my discussions with Dr. Leary after the completion of our experiments in lab. I really enjoyed trying to disentangle the web of physiological feedback and feedforward loops and it was then that I decided to pursue a career in physiology research.

Upon the suggestion of Dr. Leary, I entered a summer undergraduate program in the Physiology Department at the University of North Carolina during my junior year of college. Although I doggedly worked on a project that produced no useful data, this summer experience was worthwhile. It was at UNC that I realized I felt at home in an academic research environment and it was also where I met the most influential man in my scientific career, Dr. Edward Perl.

Edward Perl, by nearly universal opinion, is an intimidating man. Perhaps it was luck that our first meeting was at an ice cream social and our conversation focused on a peculiar but mutually favored type of sailboat called a catboat. After a single scientific discussion, I decided I wanted to be trained by Edward Perl. During my graduate work, Ed Perl taught me how to design experiments, be critical, and most important how to be a good member of the scientific community. It was in Ed’s lab that I also decided to work on sensory processing. It was not that I thought the initial steps of sensory processing were the most interesting problem in neuroscience, but I realized that I could not move deeper into the nervous system until I understood its inputs. Within the first weeks of joining the Perl lab I realized that sensory processing even at the first synapse in the central nervous system is dauntingly complicated. It was around this time when I was fortunate enough to attend a talk by Guoping Feng. Guoping and Josh Sanes had just completed their work using genetically encoded fluorescent proteins to label a specific population of neurons in the brain. Enamored by this approach, I convinced Perl to allow me to try combining mouse genetics, molecular biology, and electrophysiology in the spinal cord.  From this work we characterized the molecular, anatomical, and physiological features of a particular class of interneurons involved in nociceptive processing at its first relay station in the central nervous system.

While this approach was successful, I was limited by an inability to design my own genetic tools to further explore neuronal circuits. Frustrated by this limitation, I decided to do a postdoctoral fellowship in Tom Jessell’s lab at Columbia University which was pioneering many of these genetic approaches. My experience in Tom’s lab and my decision to accept a lab head position at Janelia Research Campus has emboldened me to engage in an uninhibited pursuit to understand sensory processing.