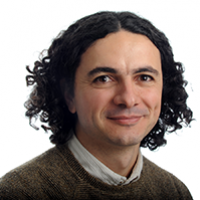 Albert Cardona keeps an online travelogue of where his research takes him. A quick read reveals not only frequent Atlantic Ocean-hopping from his previous lab in Zurich to collaborate with neuroscientists in the United States, but also his adventurous spirit for conquering the brain's myriad connections.

Cardona began his inquiry by studying the brains of flatworms while a doctoral student at University of Barcelona. There, he investigated how flatworm planarians build a brain during embryonic development and compared that to how planarians regenerate a brain after a trip to the guillotine. While a student, Cardona made several visits to the lab of Volker Hartenstein, who had described brain development of other flatworms, at University of California, Los Angeles. The lab's main work on the fruit fly, Drosophila melanogaster's embryonic and larval brains and Hartenstein's enthusiasm for probing what makes brains each tick differently, attracted Cardona.

"We had very interesting discussions about, if a planarian regrows a new brain, is it the same individual?" In planarians, Cardona explains, social behavior occurs on very slow time scales. Flies, on the other hand, exhibit dynamic, continuous social behavior, showing preferences for mates and foods, and even fighting when these are limited. That, along with the genetic tractability of fly brain cells, convinced Cardona to switch from flatworms to the fruit fly.

Working with Hartenstein later, as a postdoctoral researcher, Cardona became interested in knowing how particular circuitry in the fly brain produces behaviors and whether differing circuit architecture is responsible for variations in behavior seen between individual flies. In other words, do brain connections determine the choosiness of a fly?

He began studying the connections between the fruit fly larval brain and the ventral nerve cord, which is equivalent to the spinal cord in mammals. The larval brain is ideal for reconstructing circuits because it is a tinier version of the adult fly brain, containing only 12,000 neurons versus 150,000. Fruit fly larvae exhibit a range of tractable, quantifiable behaviors, such as tracking toward darkness and escaping predators.

To map brain circuitry at the level of neuronal cell connections, or synapses, requires slicing thousands of 50-nanometer-thick sections of a fly brain and then using transmission electron microscopy to capture literally millions of images. Each image captured by the camera has to be "stitched" to its neighbors, much like a panoramic view taken in multiple photos by a tourist. But the heat of the electron beam distorts the thin sections, making the digital stitching process difficult.

To fix this, Cardona developed TrakEM2 open source software in collaboration with other labs around the world. The software finds the common information, or correspondences, across images to minimize distortion. The program also fixes distortions between sections, to give a serial 2-D volume of images with everything in proper register, which can be followed like a video. From that, a researcher can reconstruct the 3-D "skeleton" network of neural connections. It's a process that requires both large amounts of computing power and researcher-hours to follow the neurons from one slice to the next.

Previously at the Institute of Neuroinformatics in Zurich, where Cardona was a group leader, his lab mapped the circuitry downstream of the larval fly's somatosensory neurons—those that detect touch, pain, and orientation of body parts in space. The project reconstructed circuitry for one ventral nerve cord segment, similar to one section of the spinal cord. Now, at Janelia, Cardona will expand his research program to reconstruct multiple larval brains to see if common circuitry accounts for similar behaviors in individual flies.

"Their digging behavior is a good model for somatosensory integration. They take information about vibrations, temperature, humidity, smell, softness and construct in their heads, is this is a good place to start digging?"

His group will reconstruct this circuit from three more animals, some of which will be genetically manipulated. "We can alter the connections, redirecting pain input into the vibration-sensing area and see how the animal behaves or misbehaves." For one of these animals, Cardona wants to reconstruct the whole brain—all 12,000 neurons in a broad community effort using collaborative software he helped develop, called CATMAID. This tool acts like a "Google Maps" view of brain volumes so that neuroscientists around the world can connect to a remote database through their Internet browsers and reconstruct neural connections from the same images simultaneously. The project is a "50 man-year effort," meaning it will need 50-100 researchers working 6-12 months each. "That's the crazy, 'let's dream big' goal of the lab."