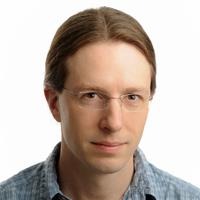 I received my BS in Cognitive Science from Carnegie Mellon University (1994), where I worked on problems in artificial intelligence with Herb Simon.  I received my PhD from Caltech (2002), in the lab of Mark Konishi, where I studied the neural basis of learning and motor control in birdsong.  Large portions of this work were done at Bell Labs, where I worked with Michael Fee.  After leaving Caltech, I did a postdoc with Markus Meister (Harvard University), where I studied the neural circuits underlying motion processing in the amphibian retina.  During this time I was a Helen Hay Whitney Fellow and Burroughs Wellcome Fellow.

Since 2008 I have been a Group Leader at Janelia.  Our work here focuses on understanding the principles underlying neural information processing -- in short, how neurons collectively solve interesting behavioral problems.  These questions are currently pursued in the salamander and the dragonfly, where we are attempting to develop mechanistic descriptions of prey capture in terms of the underlying neural circuit dynamics.

Selected honors include the Lindsley Prize in Behavioral Neuroscience, the Capranica Foundation Prize in Neuroethology, and a Grass Fellowship.