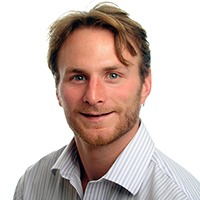 When not running around outdoors, Dan develops and applies approaches to characterize the computational units of the brain.  A physicist by training, Dan prefers to work on the tractable (yet still surprisingly complicated) fruit fly. The central brain of the fruit fly has 100,000 neurons. Thanks to recent efforts to image each of these neurons at high resolution with electron microscopy, the connectivity between each of them can now be found. Dan uses these neural connectivity maps to define computational units and then generates hypotheses about how the structure of these units leads to their individual functions. He then tests these hypotheses with the powerful set of genetic tools that are unique to the fruit fly. Almost every neuron in the fruit fly brain can consistently be identified across animals, and that neuron’s neural activity can be monitored, excited, or inhibited.