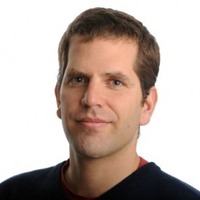 Davi Bock studies how the activity of neuronal circuits relates to the anatomical "wiring" diagram of the neurons comprising the circuitry. Following physiological characterization of a set of neurons, multi-terabyte electron microscopy image volumes containing the characterized neurons are generated using high-throughput electron microscopy of serial thin sections. Connectivity between neurons is established by tracing the axons, dendrites, and synapses through the imaged volume, and patterns of connectivity are compared to the functional properties of the neurons in the circuit. In this way, the relationship between how neuronal circuits process information and how their constituent neurons are connected to one another can be explored.

How do you prepare for a career in neuroscience? For Davi Bock, it meant bringing together his diverse interests and expertise. The foundation was laid in high school, where he painted and sculpted alongside carrying out chemistry and physics experiments. His college biology degree included coursework in robotics and evolutionary computation and led to a job in the corporate world as a computer programmer. But biology drew him back, and now he is applying all his talents and training to mapping how circuits in the brain transform information into behavior.
“It was time to go deep. I had done a thousand different things, it was time to become an expert at something,” says Bock.

During his first year of graduate school at Harvard, Bock read a paper from 1987 that would set the course of his research career. Using electron microscopy (EM), the scientists had labored meticulously to reconstruct a fragment of one neuron’s "wiring diagram," charting where just a tiny part of the neuron’s axon connected to four other neurons. It struck Bock that to truly understand how the brain’s circuits work, scientists would need to be able to see the whole wiring diagram of a circuit—all the connections between entire ensembles of cells.
“There’s a hole here and I knew that if I could make a contribution to this area, it might contribute to the whole field of neurobiology,” says Bock. At the time, no scientists in Bock’s grad program were working on this problem. However, he discovered that Harvard Medical School professor Clay Reid believed that mapping complete wiring diagrams was crucial to answering questions in visual neuroscience. Together, they set out to build a high-throughput EM system capable of imaging vastly larger volumes of the brain than had previously been possible.

The team accomplished this by jacking up a traditional transmission electron microscope by putting it on stilts—an action that mimicked moving a movie projector away from the screen and resulted in a bigger picture. Because the resolution of EM is already very high, this allowed them to capture more detailed information from each slice imaged. Then, to speed up the imaging process and keep costs down, Reid had the idea to use overlapping fields of view. In other words, they would use an array of small, fast cameras to capture parts of the dinner plate–sized image and then reassemble them with software. Bock programmed the cameras to take multiple fast snapshots of the brain section before the microscope stage holding the sample moves slightly for the next set of pictures. Breaking each exposure into multiple frames means the EM system spends much less time waiting for the stage to settle than a conventional electron microscope.

As a result, their microscope works 16 times faster than commercially available scopes. However, someone must change out the brain slice samples manually—no small feat when the circuits being studied involve thousands of slices. Bock and his lab mates have collected images of a cluster of 15 neurons and the hundreds of adjacent cells to which they connect. The team knows that these 15 neurons form a circuit that recognizes certain visual patterns and they know exactly what each neuron does in the circuit. So, they can use the completed wiring diagram to match up a neuron’s job with its anatomical connections to other cells.

“To resolve these incredibly fine wires and the connections between them, we need the images to be on the nanometer scale,” or a billionth of a meter, explains Bock. At the same time, though, to get the complete picture, he must survey a chunk of brain tissue that is 100,000 times that scale in thickness. “This is why you need a high-throughput imaging system. When we run it at full steam, the scope generates one trillion bytes of data per day.”

At Janelia, Bock extends his work to tackle two important goals—to build another high-throughput EM that will automatically load the thousands of brain slice samples and to find ways to deal efficiently with such huge amounts of raw data.

“When you look at these images, it’s like a bowl of spaghetti, each piece tangled up with the others. How do you keep track of the data? Which strand is which? And how are they are connected to each other?” Bock asks. “Eventually, we want to scale up to a section of brain that would be like an Olympic-size swimming pool of spaghetti, where each strand can literally stretch from one end to the other.”

Clearly not intimidated by such a task, Bock will collaborate with other Janelia scientists who are using sophisticated neurobiology to determine the functions of neurons in other types of circuits. He’ll supply the wiring diagrams of the physical, anatomical connections that determine how the circuits control behaviors—such as a mouse sampling its environment through its skittering whiskers. Bock’s Renaissance man style will surely blend together artistic appreciation and computing savvy to dissect and define connectivity in the brain’s circuits.