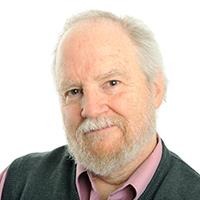 From my earliest memories of my youth in Akron, Ohio, it was clear that I was going to be some kind of a biologist. Like most other young boys, my earliest passion was dinosaurs, but by my teens I had become fascinated with insects and I have not wandered from them since.

As a freshman at the University of Notre Dame, I was fortunate to start working in the laboratory of George B. Craig, who ran a project on mosquito genetics. I washed glassware and added specimens to the Departmental insect collection, but I was also introduced to scientific research as an international endeavor since the focus of the Craig’s lab was devising genetic methods to track and control insect vectors of human disease. I was especially intrigued by Craig’s finding that the accessory glands of male mosquitoes contained a substance that, when injected into a virgin female, would switch her behavior into a “mated mode” including oviposition behavior and rejection of courting males.

As a graduate student at Harvard University, I pursued my growing interest in the role of hormones in regulating insect behavior, now under the tutelage of Lynn Riddiford, who later became my wife. While in graduate school, I identified an insect neurohormone, eclosion hormone, which causes insects to perform their ecdysis behavior, a complex behavioral sequence that mediates the shedding of the old cuticle at the end of each molt. We could elicit a stereotyped 75 minute program of innate behavior simply by injecting the insect with the hormone. Amazingly, we could also elicit the motor program for this sequence by exposing the insect’s isolated nervous system to eclosion hormone in the bathing medium.

After receiving my PhD in 1970, I remained at Harvard for 3 more years as a Junior Fellow in the Harvard Society of Fellows. My interests expanded into biological “clocks” and how hormones act to adjust an animal’s behavioral responses to match its physiological and developmental conditions. Of course, one of the most intriguing aspects of hormone action in insects is the regulation of their spectacular metamorphosis. Working on a variety of wild silkmoths and the hawkmoth, Manduca sexta, I began to examine how hormones acted to remodel their nervous system as these insects made their transition from caterpillar to moth. These themes then dominated my laboratory after Lynn Riddiford and I moved to the University of Washington in 1973.

Through the next 34 years at the University of Washington, I was fortunate to have a very talented series of graduate students and postdocs who transformed Manduca into a valuable model system for examining hormone action on the CNS. Behavioral studies focused on eclosion hormone and an expanding web of other hormones and neuromodulators that micromanage the ecdysis sequence. Developmental studies led into areas of neurogenesis, programmed cell death and neuronal remodeling as we examined the mechanisms that transformed the larval CNS into its adult version. My tenure at the University of Washington, though, was punctuated by sabbatical leaves that allowed me to periodically retool and redirect my research program.

Although the moths provided admirable material for cellular studies of hormone action, the seduction of the genetic and molecular tools available in the fruit fly, Drosophila melanogaster, eventually became too great. In 1986, I went on sabbatical to Cambridge University to learn Drosophila genetics and neurodevelopment from Michael Bate in Zoology. The last five months of this sabbatical were then spent working on tsetse fly development in Kenya, and Lynn and I developed an “addiction” to Africa that has resulted in almost yearly trips back to the continent ever since.

By my next sabbatical, in 1993, it became clear that novel insights into metamorphosis might be gained by working on the embryonic development of “lower” insects that lack a complex metamorphosis. Our time in Canberra, Australia, working with Eldon Ball, examined the effects of the “metamorphic” hormones on the development of grasshopper embryos and reinforced an old idea that the larva should be considered as a free-living, feeding “embryo”. The Canberra work sparked our interest in “evo-devo”, a newly burgeoning field that married evolution with development. This interest resulted in our return to Cambridge in 2000 for a sabbatical with Michael Akam, one of the founders of the evo-devo field.

My evolutionary interests crystallized around insect neuronal stem cells (the neuroblasts) and the lineages of neurons that they produce. The set of embryonic neuroblasts is very stereotyped and comparative studies have shown that there are few changes in this stem cell array through insect evolution. To understand how this system evolved and diversified, though, it would be necessary to pick one species and determine what types of neurons are made by each neuroblast and then relate each lineage of neurons to their behavioral functions. Drosophila was the obvious insect for this task but the scope of such a project was beyond anything that I could have accomplished at the University of Washington. Consequently, in 2007 I retired from the University to become a Group Leader at Janelia Farm to pursue this goal.