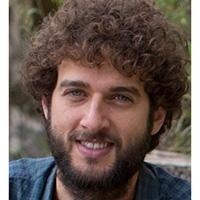 As part of the Interdisciplinary PhD program at The Edmond and Lily Safra Center for Brain Sciences (ELSC), I was exposed to both theoretical and experimental neuroscience and learned to appreciate how physico-mathematical theories can be used to derive better hypothesis-driven experiments.

Under the supervision of Dr. David Hansel, a theoretical neuroscientist working at the CNRS in Paris, I studied how temporally variable and spatially correlated neuronal activity emerges in the central nervous system and how it can drive behavioral variability and exploration during learning. With a tight collaboration with Dr. Arthur Leblois, an experimentalist working on songbirds in Paris, we were able to show how behavioral variability is generated in the songbird system. Motivated by the theoretical results of this study, I also collaborated with Carl van Vreeswijk (CNRS, Paris) to develop a general theory for the emergence of spatial correlations in the activity of large cortical neural networks operating in the balanced excitatory/inhibitory regime.

At the end of 2017, I joined Janelia to develop theoretical tools for learning, controlling and perturbing of large neural networks.