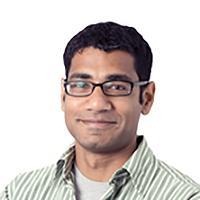 Vilas obtained his PhD in Applied Mathematics from Northwestern University, where he worked on ion channel kinetics and synaptic integration in neurons using both modeling and experimental techniques. Prior to joining Janelia, he was part of the Modeling, Analysis, and Theory team at the Allen Institute for Brain Science, where he worked on analysis of single-cell and tissue-level gene expression data, with the goal of identifying cell types and combinatorial gene codes in adult and developing brain regions. At Janelia, he is investigating transcriptomic cell type diversity and generating predictive models relating gene expression to neuronal phenotypes and function.