An approaching predator and self-motion toward an object can generate similar looming patterns on the retina, but these situations demand different rapid responses. How central circuits flexibly process visual cues to activate appropriate, fast motor pathways remains unclear. Here we identify two descending neuron (DN) types that control landing and contribute to visuomotor flexibility in Drosophila. For each, silencing impairs visually evoked landing, activation drives landing, and spike rate determines leg extension amplitude. Critically, visual responses of both DNs are severely attenuated during non-flight periods, effectively decoupling visual stimuli from the landing motor pathway when landing is inappropriate. The flight-dependence mechanism differs between DN types. Octopamine exposure mimics flight effects in one, whereas the other probably receives neuronal feedback from flight motor circuits. Thus, this sensorimotor flexibility arises from distinct mechanisms for gating action-specific descending pathways, such that sensory and motor networks are coupled or decoupled according to the behavioral state. 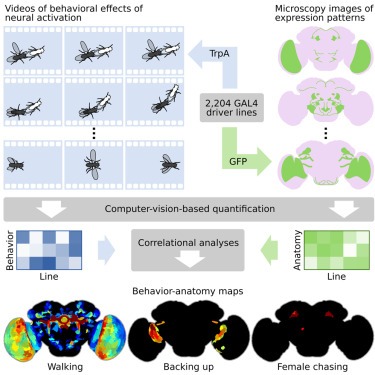