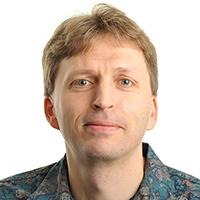 Gleb Shtengel received a Ph.D. in physics at Stevens Institute of Technology in 1996. From 1991 to 1993 he studied physics of semiconductor lasers at A.F. Ioffe Physical-Technical Institute. In 1994 he joined AT&T Bell Laboratories, where he worked until 2000 on design of semiconductor lasers, modulators, and other components for fiber telecommunication systems. From 2000 to 2006 he worked at YAFO Networks Inc. and Kodeos Communications designing modules for high-speed fiber telecommunication systems. He joined the group of Harald Hess at Janelia in 2007. His current scientific interests include optical and electron microscopy and their applications to life sciences.