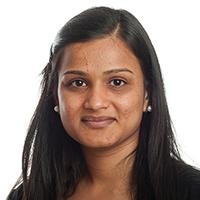 Ronak received her Bachelor’s degree in Biomedical Engineering from the Gujarat University, India in 2009 and Master’s degree from the University of Texas at Arlington in 2011. During her Master’s, she engineered and characterized fluorescent nanoparticles for cancer  imaging. She joined the Applied Physics Instrumentation Group (APIG) at Janelia Research Campus in 2012. She is mainly involved with investigating the photo-physical properties of fluorescent probes developed at Janelia.