Janelia is in Loudoun County, Virginia. Our campus is close to both the Washington, DC metropolitan area and the many scenic attractions of beautiful Northern Virginia. Janelians enjoy both the luxury of our quiet, wooded campus and easy access to urban amenities.

Loudoun is a growing and vibrant community with rapid residential and economic growth, a diverse and well-educated population, and one of the best school systems in the country. Dubbed the "Silicon Valley of the East," more than 50% of the world's internet traffic passes through the county. It has also been called DC wine country, with more than 50 wineries and 12 craft breweries. Dulles International Airport is just eight miles away, and the Wiehle-Reston East Metrorail station is just 13 miles from Janelia.

Nearby residential towns include the modern development of Ashburn and, about six miles from the Janelia campus, the historic town of Leesburg. Residents have ample shopping resources with the Leesburg Corner Premium Outlets just around the corner and one of the region's largest shopping malls, Tysons Corner Center, close by.

Bordered by the Potomac River and the Blue Ridge Mountains, Loudoun boasts some spectacular scenery and ample opportunities to play outdoors. Civil War battlefields, the Shenandoah National Park, hiking trails, campgrounds, the Potomac river, and caverns are all nearby.

Northern Virginia offers Janelians the amenities of an urban environment with a lower cost of living and a shorter commute than from Washington. With excellent public schools, unique arts venues, and access to national parks, hiking trails, and scenic landscapes, many Janelians make northern Virginia their home.

Arlington, Alexandria, and Reston are minutes away from downtown DC by car or Metrorail and offer pedestrian-friendly, multicultural neighborhoods with shopping, dining, and other services conveniently located near residential areas.  Janelia provides a shuttle from Arlington and Reston to campus.

Closer to Janelia is Fairfax County, an expansive region with a population that exceeds that of seven states. Throughout Northern Virginia, attractive tree-lined neighborhoods are inhabited by residents with a strong sense of community involvement.

Whether you choose to live downtown or just visit occasionally, the city is easily navigable on foot or via the six lines of the city’s Metrorail system, which extends into the surrounding suburbs.

DC universities are an integral part of the area's dynamic research community. Major universities include Georgetown, George Washington, Howard, American, and Gallaudet University. The District is also home to the Federal Government, myriad non-profit organizations, many startups and businesses large and small, offering employment opportunities for spouses and partners of Janelia scientists.

The Maryland suburbs of Washington, DC offer residents the choice of urban or rural environments with easy access to the cultural offerings of the city.

For Janelia scientists, the most convenient Maryland locations will be in Frederick and Montgomery Counties. Frederick County comprises historic towns set amongst wineries, Civil War battlefields, and scenic farmland, whereas Montgomery County is an eclectic conglomeration of communities ranging from those in its urban southern portion to the rolling farmland further west.

The southern portion of Montgomery County includes the cities of Bethesda, Silver Spring, and Chevy Chase (home to HHMI headquarters). Residents in these areas enjoy a little less traffic and more space than life in the city center without sacrificing cultural benefits, such as excellent ethnic cuisine and art-house theaters. Washington's Metrorail system extends into these communities, making it easy to venture downtown without traffic and parking hassles.

Like the rest of the DC area, suburban Maryland has a thriving research community. The largest research center in the area, with more than 18,000 employees, is located in Bethesda at the 27 institutes and centers of the National Institutes of Health. The National Library of Medicine, the largest medical library in the world, is also located on the NIH campus. The Food and Drug Administration is headquartered just north of Bethesda in Rockville, and the National Institute of Standards and Technology is located in Gaithersburg. The Johns Hopkins University and the Carnegie Institution in Baltimore are also nearby.

Beyond the Metro Area

The Washington DC area's convenient location makes it easy to escape for time away from the city. With the Blue Ridge Mountains, the Chesapeake Bay, and the Atlantic Coast beaches all nearby, a few hours of driving can transport you to what feels like a different world. For more urban adventures, it's a short trip to Baltimore to explore the harbor or the National Aquarium, and Philadelphia and New York can both be reached in a few hours by car or train. 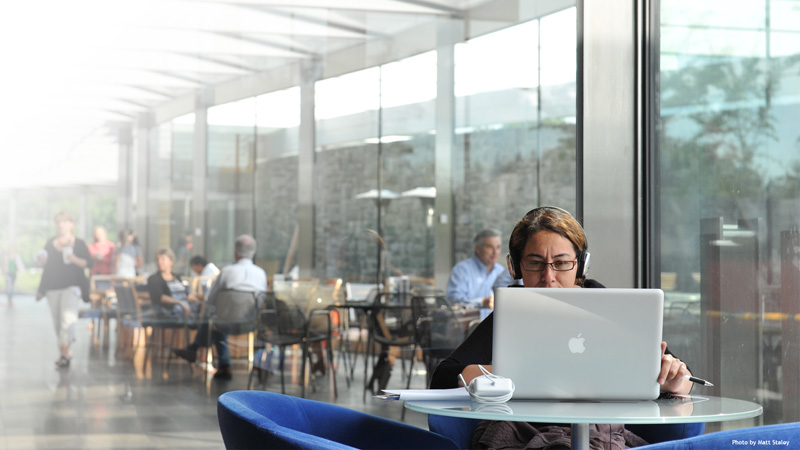 Janelians on a multi-lab retreat to nearby Shenandoah National Park, approximately 90 minutes from campus.

Our campus includes 700 acres of woods and meadow on the banks of the Potomac River.

Washington, DC is 30 miles from campus. Some Janelians live downtown or visit the city's sites on the weekends.

From textiles to espionage, few topics worth learning about cannot be found in one of Washington's many museums. The 19 local museums of the Smithsonian Institution could take years to explore.

The monuments provide an inspiring backdrop for the volleyball and ultimate frisbee games.

Skyline Drive is a popular, spectacular day trip in the Autumn.

Seneca Creek Trail is one of the many hiking and biking opportunities in suburban Maryland.

Bethany Beach in nearby Delaware is a popular weekend destination for Janelians.