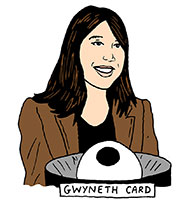 Gwyneth Card wants to understand how animals decide what to do and when, and she’s turned to fruit flies for help. Studying the neural basis of animal behavior in insects may seem odd, but it makes perfect sense when you consider that the human brain contains roughly 100 billion nerve cells, while the fly has a mere 100,000. Card, a group leader at the Janelia Research Campus, tries to decipher the neural pathways that underlie Drosophila escape behavior – the sequence of movements a fruit fly performs in response to a predator. Even with the fly’s smaller brain size, this isn’t an easy task, so her lab group has teamed up with other scientists at Janelia. “Together with our colleagues at Janelia and in the field, we think we can identify all the neurons in a fly brain and get a complete idea of what the fly’s nervous system is doing,” she explains.

Card and her lab group created an automated apparatus called the “Fly Pez,” to streamline the study of escape behavior. Much like the candy dispenser after which it’s named, the Fly Pez works by dispensing a single fly into a miniature domed arena. A dark circle projected on the dome simulates the approach of a predatory damselfly, prompting the fruit fly to perform one of several types of escape behavior. If the attack seems imminent, for example, the fly will make a quick, clumsy escape, hopping to dodge its predator. But if time permits, the fly will execute a more controlled liftoff, taking the time to adjust its wings and legs so it can simultaneously flap and kick off.

The group’s initial findings indicated that a type of cells called descending neurons are responsible for the escape behavior. These cells extend from the fly’s brain to its ventral nerve cord (the fly equivalent of a spinal cord) and encode all of the brain’s sensory processing. Now, Card wants to decipher how the fly brain perceives sensory information – such as an impending damselfly attack – and passes it along these neurons to spark a particular behavior.

To home in on the neurons involved in these behaviors, Card collaborated with colleagues to start Janelia’s Fly Descending Interneuron project team in order to genetically modify the descending neurons of 180 fly lines. Each fly line harbors a modification in a different one of these nerve cells, which can be activated by a single pulse of red light. This technique, known as optogenetics, allows Card to monitor the activity of specific neurons and record the resulting behavior of the flies in the Pez.

Tracking the Subtleties of Behavior 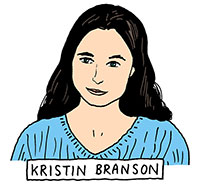 Card has turned to Janelia Group Leader Kristin Branson, an expert in computer visualization, to help analyze data collected from a fly tethered to a plate. The pair are zeroing in on the exact sequence of movements that a fly engages in when shown predator-mimicking looming stimuli while flying. Previously, Branson and her lab team created motion-tracking software to plot the movements that accompany specific behaviors in mice. Card and Branson are working together to tailor the software to track the finer data points involved in Drosophila movement.

Using a combination of high-speed video and machine learning, Branson’s algorithm can capture the nuanced movements that are essential for linking neural activity to specific behavior in the flies. “The behavior is fairly subtle, and we want to know all of the details about the fly moving its legs,” explains Branson. To get started, the scientists first primed the algorithm by screening video footage of fly behavior on the plate while manually tagging areas of interest – in this case, specific points along the fly’s legs. These annotations helped the algorithm “learn” to automatically track those same points in other videos. With sufficient manual data plotted, Branson’s team is starting to transition into the next phase – training the algorithm to tag the flies on its own.

What Makes a Fly Jump? 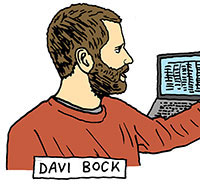 Within the bundle of descending neurons in a fly’s brain lies a pair of large nerve cells known as the giant fibers. Extending from the brain to the ventral nerve cord, the giant fibers control how quickly a fly extends its legs when it pushes off from a surface. To get a better idea of how these neurons fire in coordination with other nerve cells, Card teamed up with Davi Bock, a group leader at Janelia whose team employs large-scale electron microscopy to image volumes of neural tissue, and then uses those images to create wiring diagrams of neural circuits.

Together, Card and Bock are exploring the “information input” for the giant fiber. Simply put, they are trying to tease out which neurons stimulate the giant fiber and elicit escape behavior. “Eventually, we want to be able to say, okay, here's how the fly's visual system processes this looming stimulus,” says Bock. “So what's the arc from [the brain] to the motor response of escape?” 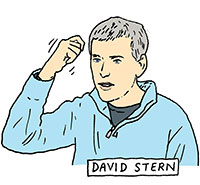 Like Card, Janelia Group Leader David Stern is interested in fruit fly behavior. But the evolutionary and developmental biologist is more intrigued by the fly’s courtship behavior than its response to a predator. To facilitate his studies, Stern and his colleagues at Princeton University developed software that can analyze a fly’s movements and objectively assign these movements to specific behaviors, such as grooming, running, or singing. Their approach is extremely sensitive and can detect behaviors that are not easily seen by the eye.

Recently, Card and Stern began a collaboration that combines the optogenetic reagents she developed with the Fly Descending Interneuron project with his behavioral analysis technology. Jessica Cande, a postdoctoral associate in Stern’s lab, has been screening all of the descending interneuron genetic fly lines to determine the function of each one. The result is a “behavioral map” in which specific nerve cells are tagged according to which behaviors they can drive. Card’s input on how to analyze the data has been very useful, says Cande. “Extracting information from it is often quite challenging, and it's always helpful to talk it over with people who are not so close to the project, yet are extremely well-informed, like Gwyneth.”

It Starts with a Sketch 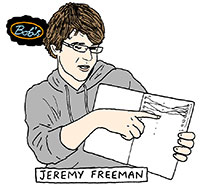 Once Card has mapped out all the neural pathways involved in fly escape behavior, she’ll need a way to visualize and share her data – an area in which Janelia Group Leader Jeremy Freeman excels. Card’s meetings with Freeman, a visualization and data-processing expert, often start with both of them poring over his hand-drawn sketches of the sprawling network of neurons involved in escape behavior. “When you’re collaborating with colleagues, you still can’t really beat pencil and paper for getting ideas down quickly, exchanging thoughts, and flushing out visions,” she says.

Card points out that connectomes – diagrams showing how neurons interconnect – often just look at connectivity between regions of the brain. She and Freeman want to take this idea further and represent individual neurons in their diagrams. They aim to identify patterns in Card’s data by reorganizing it into a more intuitive, visual state. “Visualizing it the right way might give us insight into what patterns we're seeing,” says Freeman. “But coming up with the right visualization is the hard part, so that's what we are talking through – strategies for visualizing these data.” With every iteration, Card and Freeman come one step closer to a clear picture of neuronal connectivity.

Although they ultimately strive to more clearly understand Drosophila behavior and the neural components that support it, Card and her collaborators also have a bigger picture in mind. They hope that by learning how behavior is encoded in the fly’s brain, they will gain insights into how other organisms’ nervous systems – including humans – similarly process information about the environment and use it to make specific decisions.

“If we’re playing baseball, do we swing the bat and hit the ball? Do we not swing? Do we bunt?” asks Card. “We think that by understanding these circuits to completeness in the fly, we can start to get clues as to how our own brains might be making those kinds of choices.” 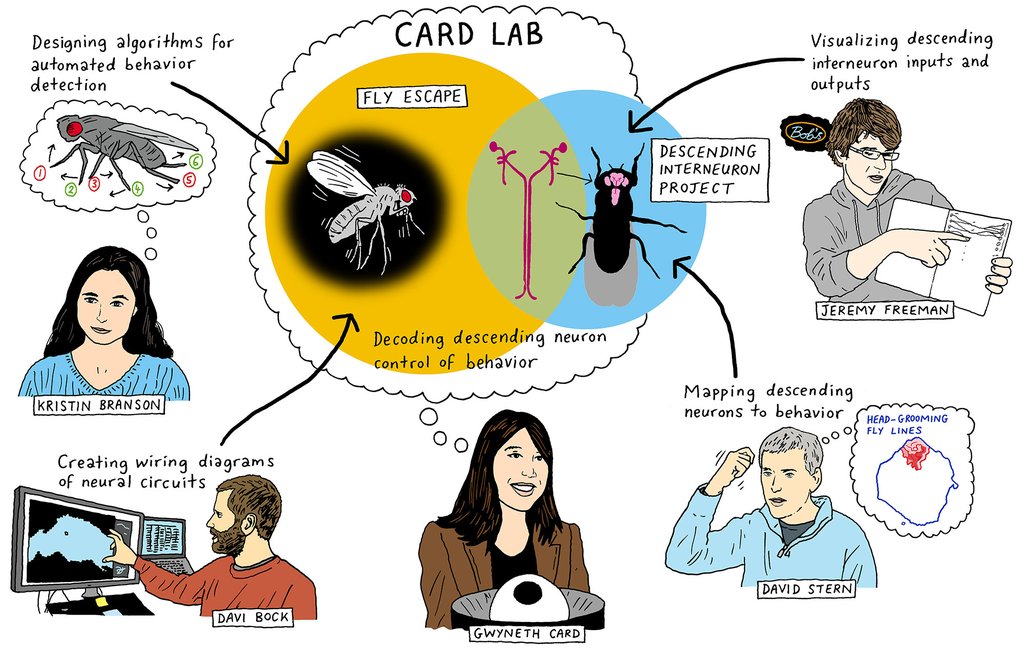 Hover over a scientist to learn how he or she is helping to decipher the neural pathways that underlie fruit fly escape behavior. Illustration by Peter Arkle.

Each member of the Card Lab's team of talented postdocs brings unique expertise to the lab. See how they work.

The Lab: A Video Series

There are more than 50 labs at Janelia, each with a unique story. The short-documentary video series "The Lab" provides a first-hand look at the work of Janelia's scientists.

The Descending Interneuron project aims to create and characterize driver lines for each of the approximately 350 types of descending interneurons and use those lines to understand their function.