Sadly, even optical microscopy is somewhat invasive: extended imaging of living cells or tissues often leads to light-induced damage. Furthermore, in fluorescence microscopy, every sample contains a finite number of fluorescent molecules, each of which will emit a finite number of photons before irrevocably bleaching. In other words, every fluorescent sample has a finite photon budget. As spatiotemporal resolution improves, it becomes imperative to devise methods that use this budget efficiently. By confining the light excitation to a plane of submicron thickness, our Bessel beam plane illumination microscope substantially reduces photobleaching and phototoxicity compared to popular epi-illumination techniques (e.g., widefield or confocal microscopy), thereby permitting hundreds of 3D image stacks encompassing tens of thousands of image frames to be acquired from a single living cell. 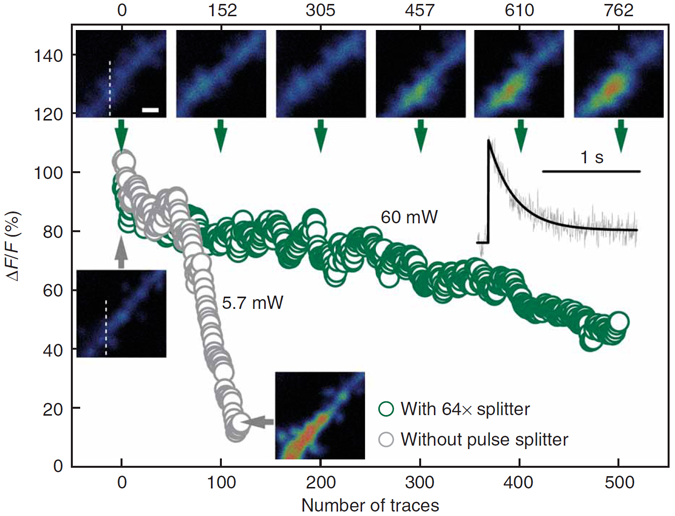 The high peak excitation intensity required in nonlinear optical imaging methods, such as two photon fluorescence microscopy, can also lead to significant photodamage. Together, Na, I, and our colleague Jeff Magee have shown that our pulse splitter, when used with N-fold splitting and N1/2 higher average laser power, produces the same signal level as a two photon system without splitting, but with up to nine-fold less photobleaching in vivo and a six- to twenty-fold reduction in the rate of photodamage during calcium recording of neural activity in acute brain slices.