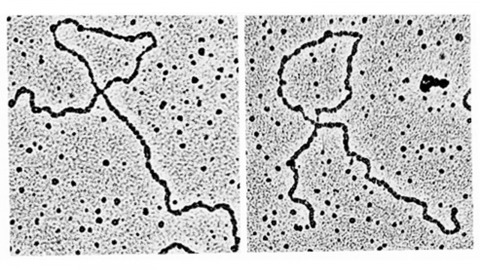 The stability of elements of three different dispersed repeated gene families in the genome of Drosophila tissue culture cells has been examined. Different amounts of sequences homologous to elements of 412, copia and 297 dispersed repeated gene families are found in the genomes of D. melanogaster embryonic and tissue culture cells. In general the amount of these sequences is increased in the cell lines. The additional sequences homologous to 412, copia and 297 occur as intact elements and are dispersed to new sites in the cell culture genome. It appears that these elements can insert at many alternative sites. We also describe a DNA sequence arrangement found in the D. melanogaster embryo genome which appears to result from a transposition of an element of the copia dispersed repeated gene family into a new chromosomal site. The mechanism of insertion of this copia element is precise to within 90 bp and may involve a region of weak sequence homology between the site of insertion and the direct terminal repeats of the copia element.