Single molecule-based superresolution imaging has become an essential tool in modern cell biology. Because of the limited depth of field of optical imaging systems, one of the major challenges in superresolution imaging resides in capturing the 3D nanoscale morphology of the whole cell. Despite many previous attempts to extend the application of photo-activated localization microscopy (PALM) and stochastic optical reconstruction microscopy (STORM) techniques into three dimensions, effective localization depths do not typically exceed 1.2 µm. Thus, 3D imaging of whole cells (or even large organelles) still demands sequential acquisition at different axial positions and, therefore, suffers from the combined effects of out-of-focus molecule activation (increased background) and bleaching (loss of detections). Here, we present the use of multifocus microscopy for volumetric multicolor superresolution imaging. By simultaneously imaging nine different focal planes, the multifocus microscope instantaneously captures the distribution of single molecules (either fluorescent proteins or synthetic dyes) throughout an ∼4-µm-deep volume, with lateral and axial localization precisions of ∼20 and 50 nm, respectively. The capabilities of multifocus microscopy to rapidly image the 3D organization of intracellular structures are illustrated by superresolution imaging of the mammalian mitochondrial network and yeast microtubules during cell division.

In eukaryotic cells, post-translational histone modifications have an important role in gene regulation. Starting with early work on histone acetylation, a variety of residue-specific modifications have now been linked to RNA polymerase II (RNAP2) activity, but it remains unclear if these markers are active regulators of transcription or just passive byproducts. This is because studies have traditionally relied on fixed cell populations, meaning temporal resolution is limited to minutes at best, and correlated factors may not actually be present in the same cell at the same time. Complementary approaches are therefore needed to probe the dynamic interplay of histone modifications and RNAP2 with higher temporal resolution in single living cells. Here we address this problem by developing a system to track residue-specific histone modifications and RNAP2 phosphorylation in living cells by fluorescence microscopy. This increases temporal resolution to the tens-of-seconds range. Our single-cell analysis reveals histone H3 lysine-27 acetylation at a gene locus can alter downstream transcription kinetics by as much as 50%, affecting two temporally separate events. First acetylation enhances the search kinetics of transcriptional activators, and later the acetylation accelerates the transition of RNAP2 from initiation to elongation. Signatures of the latter can be found genome-wide using chromatin immunoprecipitation followed by sequencing. We argue that this regulation leads to a robust and potentially tunable transcriptional response.

The hemoglobinopathies, such as β-thalassemia and sickle cell anemia (SCA), are characterized by mutations of the β-globin gene resulting in either decreased or functionally abnormal hemoglobin (Hb) production. As bone marrow transplant is the only curative option for these patients, there is a strong need for new therapeutic approaches. Both β-thalassemia and SCA represent ideal targets for gene therapy since introduction of a normal β-globin gene can ameliorate the phenotype, as we and others have shown previously. Overcoming the developmental silencing of the fetal γ-globin gene represents an additional approach for the treatment of hemoglobinopathies. Here, we directly compare a recently established approach to activate the γ-globin gene using forced chromatin looping with pharmacologic approaches to raise γ-globin expression.

In related experiments, we are comparing the expression of a battery of genes known to regulate HbF levels (BCL11A, SOX6, KLF1 and C-Myb) in normal and SCA derived erythroid cells treated with ZF-Ldb1 or HbF inducers and compared to controls. Preliminary analyses indicate altered expression of KLF1 in SCA versus normal cells, consistent with a superior response of SCA cells to HbF induction.

In conclusion, lentiviral-mediated ZF-Ldb1 gene transfer appears superior to pharmacologic compounds in terms of efficacy and cell viability further supporting suitability for the reactivation of HbF in SCA erythroid cells.

Post-translational histone modifications are highly correlated with transcriptional activity, but the relative timing of these marks and their dynamic interplay during gene regulation remains controversial. To shed light on this problem and clarify the connections between histone modifications and transcription, we demonstrate how FabLEM (Fab-based Live Endogenous Modification labeling) can be used to simultaneously track histone H3 Lysine 9 acetylation (H3K9ac) together with RNA polymerase II Serine 2 and Serine 5 phosphorylation (RNAP2 Ser2ph/Ser5ph) in single living cells and their progeny. We provide a detailed description of the FabLEM methodology, including helpful tips for preparing and loading fluorescently conjugated antigen binding fragments (Fab) into cells for optimal results. We also introduce simple procedures for analyzing and visualizing FabLEM data, including color-coded scatterplots to track correlations between modifications through the cell cycle and temporal cross-correlation analysis to dissect modification dynamics. Using these methods, we find significant correlations that span cell generations, with a relatively strong correlation between H3K9ac and Ser5ph that appears to peak a few hours before mitosis and may reflect the bookmarking of genes for efficient re-initiation following mitosis. The techniques we have developed are broadly applicable and should help clarify how histone modifications dynamically contribute to gene regulation.

Only a few years after its inception, localization-based super-resolution microscopy has become widely employed in biological studies. Yet, it is primarily used in two-dimensional imaging and accessing the organization of cellular structures at the nanoscale in three dimensions (3D) still poses important challenges. Here, we review optical and computational techniques that enable the 3D localization of individual emitters and the reconstruction of 3D super-resolution images. These techniques are grouped into three main categories: PSF engineering, multiple plane imaging and interferometric approaches. We provide an overview of their technical implementation as well as commentary on their applicability. Finally, we discuss future trends in 3D localization-based super-resolution microscopy.

Gene regulation relies on transcription factors (TFs) exploring the nucleus searching their targets. So far, most studies have focused on how fast TFs diffuse, underestimating the role of nuclear architecture. We implemented a single-molecule tracking assay to determine TFs dynamics. We found that c-Myc is a global explorer of the nucleus. In contrast, the positive transcription elongation factor P-TEFb is a local explorer that oversamples its environment. Consequently, each c-Myc molecule is equally available for all nuclear sites while P-TEFb reaches its targets in a position-dependent manner. Our observations are consistent with a model in which the exploration geometry of TFs is restrained by their interactions with nuclear structures and not by exclusion. The geometry-controlled kinetics of TFs target-search illustrates the influence of nuclear architecture on gene regulation, and has strong implications on how proteins react in the nucleus and how their function can be regulated in space and time. 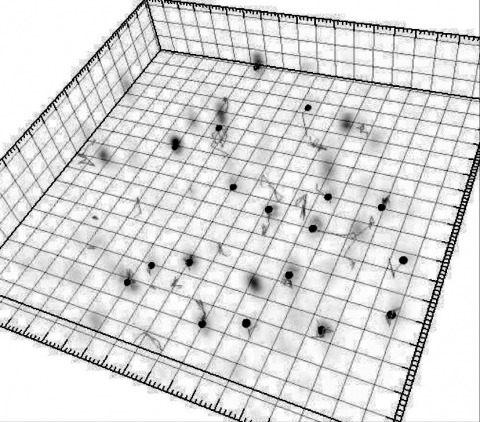 Transcription is an inherently stochastic, noisy, and multi-step process, in which fluctuations at every step can cause variations in RNA synthesis, and affect physiology and differentiation decisions in otherwise identical cells. However, it has been an experimental challenge to directly link the stochastic events at the promoter to transcript production. Here we established a fast fluorescence in situ hybridization (fastFISH) method that takes advantage of intrinsically unstructured nucleic acid sequences to achieve exceptionally fast rates of specific hybridization (\~{}10e7 M(-1)s(-1)), and allows deterministic detection of single nascent transcripts. Using a prototypical RNA polymerase, we demonstrated the use of fastFISH to measure the kinetic rates of promoter escape, elongation, and termination in one assay at the single-molecule level, at sub-second temporal resolution. The principles of fastFISH design can be used to study stochasticity in gene regulation, to select targets for gene silencing, and to design nucleic acid nanostructures. DOI: http://dx.doi.org/10.7554/eLife.01775.001.

The transcription and transport of messenger RNA (mRNA) are critical steps in regulating the spatial and temporal components of gene expression, but it has not been possible to observe the dynamics of endogenous mRNA in primary mammalian tissues. We have developed a transgenic mouse in which all β-actin mRNA is fluorescently labeled. We found that β-actin mRNA in primary fibroblasts localizes predominantly by diffusion and trapping as single mRNAs. In cultured neurons and acute brain slices, we found that multiple β-actin mRNAs can assemble together, travel by active transport, and disassemble upon depolarization by potassium chloride. Imaging of brain slices revealed immediate early induction of β-actin transcription after depolarization. Studying endogenous mRNA in live mouse tissues provides insight into its dynamic regulation within the context of the cellular and tissue microenvironment.