Have you ever pressed Silly Putty onto the funny pages of a newspaper, then stretched the transferred picture so it’s larger than the original cartoon? If so, you already have a basic understanding of how expansion microscopy (ExM), an innovative technique being used at Janelia and other labs across the country, works.

This is how Monique Copeland, a research technician in Janelia’s Anatomy and Histology facility, thought about ExM when she first learned about the technique. “ExM lets you make your tissue sample physically larger, which makes it much easier to get a closer look,” she explains. “Usually, the more nanoscale you have to go, the smarter your scope has to be. And the smarter your scope has to be, the more expensive it is. But ExM allows you to see fine details with even a standard light microscope.” ExM enlarges the size of a tissue sample by four or eight times to achieve nanoscale resolution with an ordinary microscope—that’s like blowing up a Garfield cartoon to the size of a poster board without losing resolution. 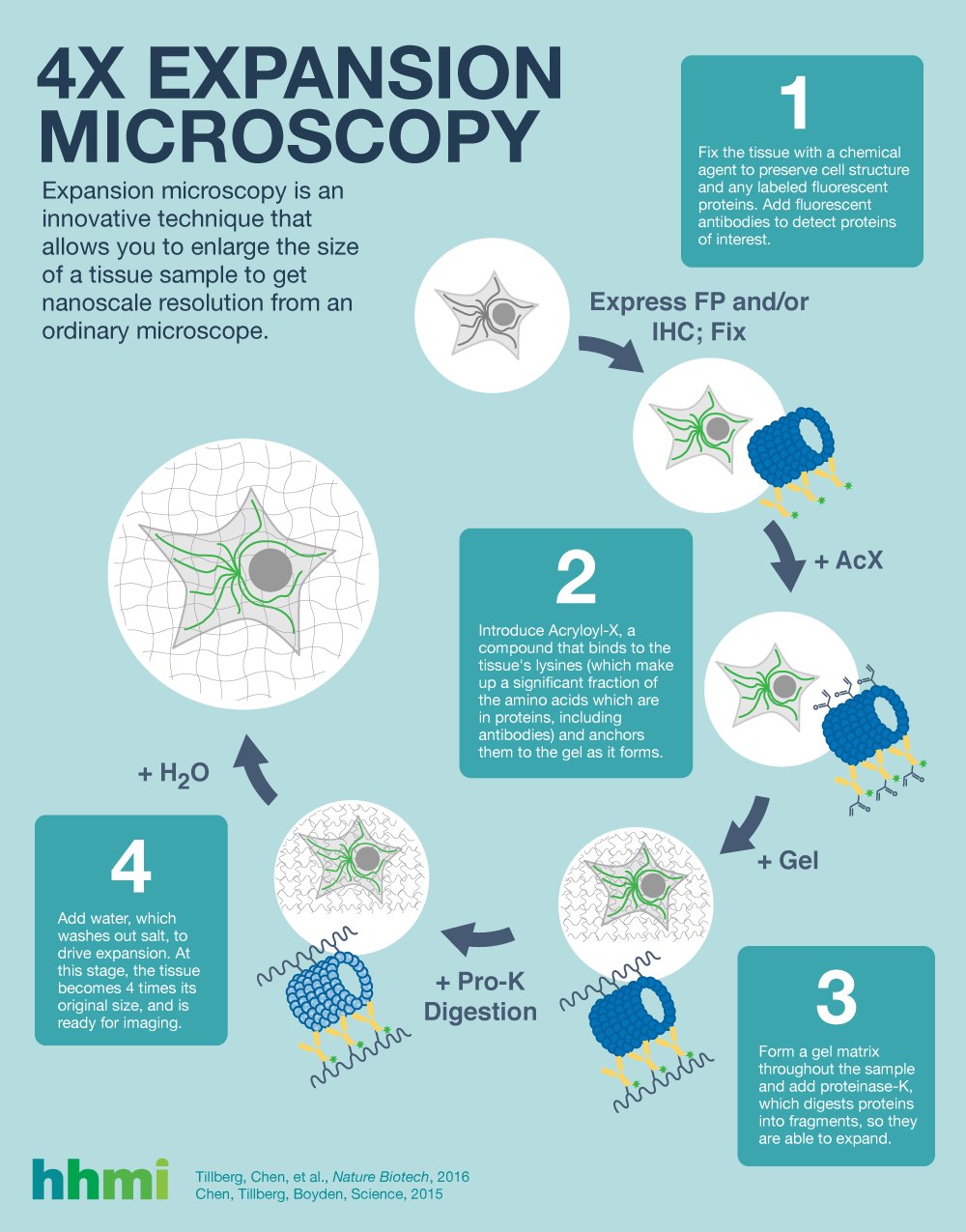 ExM was co-invented by HHMI-Simons Faculty Scholar and MIT professor Ed Boyden, current Janelia Fellow Paul Tillberg, and Fei Chen. Tillberg brought his ExM knowledge to Janelia when he arrived in 2016, and he developed an 8x method in response to the needs of scientists there. As interest for this technique grew, he saw the value in teaching Monique and the Anatomy and Histology team how to do this work for the Janelia community.

Tillberg says Janelia is the perfect environment to grow and develop a technique like ExM. “There are a lot of people here who are interested in their own scientific questions, but they are also interested in brainstorming how to use a technology that doesn't’t exist yet. I’ve also found a lot of willingness in people to be beta testers for new technologies. It’s a fantastically collaborative environment for me as a tool builder.” 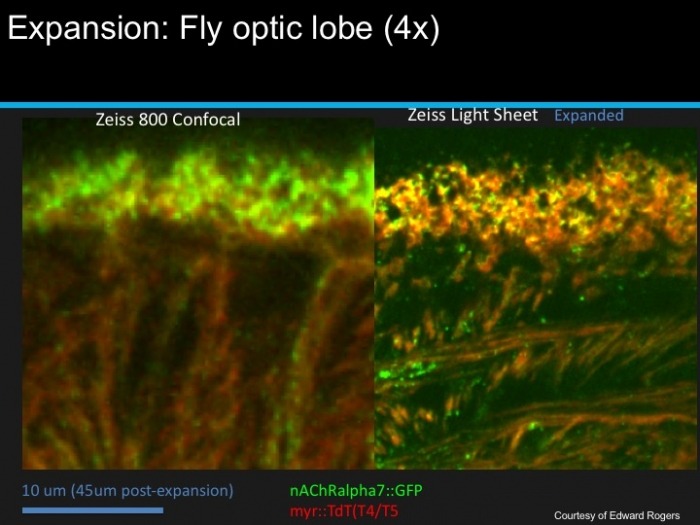 What’s next for ExM? Some researchers are now expanding specimens to 16x their original size. Boyden’s lab has been using the technique on pathological human tissue samples. At Janelia, Tillberg is currently scaling up a method to look at RNA transcripts after expansion, work that also originated in Boyden’s lab. “We are looking at making the technique robust enough such that we could take a previous specimen, something that has been through an elaborate in vivo experiment, and then probe dozens of RNA transcripts without the risk of losing the specimen or having it not work.”

Meanwhile, Copeland and her team are performing the protocol for Janelians and visitors across campus, regularly expanding tissue samples from rats, mice, zebrafish, fruit flies―even cyanobacteria. “We focus mainly on the brain, due to the nature of our work at Janelia,” Copeland says, “but you can expand almost anything.”