Researchers are using this technique to better understand how different molecularly defined neuron types work together to encode behaviors.

Some 75 million neurons tangle together in the mouse brain, and neuroscientists are constantly looking for ways to make sense of this complexity.

In recent years, scientists have classified neurons into groups based on what genes they turn on, or express. But it’s been unclear whether neurons with similar gene expression profiles are used by the brain as functional groups to encode behavior. 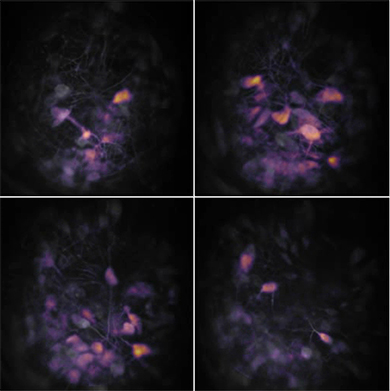 A long-term project in the lab of Janelia Group Leader Scott Sternson aims to answer this question. Over the past five years, Sternson’s team, led by research scientist Shengjin Xu, developed a new imaging technique to align neurons’ activity with their gene expression patterns. They describe the approach, called CaRMA imaging, in a paper published October 15 in the journal Science.

By applying the technique to one area of the mouse brain, “we could quantitatively show that grouping neurons by their gene expression profiles is a valid concept in neuroscience,” Sternson says. “This allows scientists to simplify the analysis of some brain functions by considering types of neurons as a group, without having to treat all cells as unique individuals.”

Sternson’s team used CaRMA imaging to track the activity of hundreds of neurons in an area of the mouse brain called the PVH, or the paraventricular nucleus of the hypothalamus. This brain region helps regulate hunger, thirst, and stress. Using two-photon calcium imaging, the team monitored neurons in the PVH while mice ate, drank, and or responded to fear-inducing stimuli. Then, they measured gene expression in those same neurons to classify each one into a cell type and overlaid the results.

“The key here is that you do the experiments in two steps.” Sternson says. “You image neuron activity during behaviors, then afterward you integrate as much molecular information about the underlying cells as possible.”

Sternson’s team found that they could, indeed, predict the way a neuron would respond during a particular behavior based on its gene expression patterns. Neurons of the same type, as defined by gene expression profile, showed similar responses to each other.

Importantly, the researchers found that neurons in the PVH weren’t tuned to just one behavior apiece. Most neuron types responded to multiple behaviors, and different behaviors were distinguished by the specific pattern of activation and inhibition of distinct neuron types.

This finding challenges some previous explanations of brain organization, Sternson says. A popular theory called labeled-line coding suggests that each neuron or cell type has one specific job – it’ll fire in response to a particular trigger. But these new findings suggest that, at least in the PVH, the brain encodes behaviors using combinations of different cell types working in harmony, like a finely tuned orchestra. That might not be true everywhere in the brain, but CaRMA imaging could be used to answer the same kinds of questions in other brain regions.