Battle of the Bots

On July 12, five teams gathered in the auditorium at the Janelia Research Campus to compete in an all-out brawl – of robots. But this was no ordinary “battle of the bots.” Instead of destroying one another with saws or torches, these autonomous robots participated in a laser tag tournament, dubbed the “PixyBattle.” 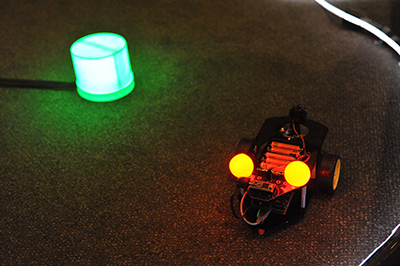 The event was organized by Janelia's Mechatronics Club, Women's Coding Circle, and Instrument Design and Fabrication support team.  PixyBattle participants harnessed the power of “PixyCams,” programmable cameras that can be trained to sense objects and colors – in this case, glowing targets and robot nemeses. The goal? Stay “alive” and earn points by zapping targets and rivals. And what was at stake? A trophy and bragging rights.

“The competition was an opportunity [for teams] to think about how you can use visual information to accomplish a specific goal,” says Bill Mowrey, a postdoc from the Leonardo Lab and member of the Mechatronics Club. “You have a machine-vision system (PixyCam) giving you a bunch of labeled objects’ locations and sizes – now what can you do with that knowledge?”

The robots – Pixy Slayer, Robo Rat, Katch, Spinning Tortoise, and Trash Panda – were equipped with identical PixyCams, leaving the competitive advantage to individualized programming and superior strategy. Some teams developed a “just-spin-and-shoot” tactic, while others took a more precise approach, zeroing their robots in on a targeted object. In addition to shooting lasers, the robots had to navigate their environment: an approximately 16 x 10 foot, ellipse-shaped arena with cylindrical targets distributed in a symmetrical pattern.

“We have been working to design and develop an algorithm to compete in this match since the competition was announced in April,” says Iljung Sam Kwak, a member of team Trash Panda. “Testing our robot and its competitive abilities took the most time.”

Come battle time, team members and spectators gathered around the LED-lit arena to watch the bots rack up points and to cheer on their favorites. The tournament involved two rounds, both comprising multiple three-minute matches. During each match, two robots rolled around the arena in a sort of shoot-and-scamper pattern, tracking down their opponent and glowing targets while trying to avoid getting tagged. 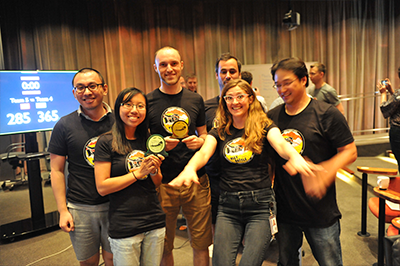 The first round, in which all five robots battled one another, resulted in a spectator-thrilling, laser tag “fight to the death” – or battery discharge. After round one, Robo Rat, Katch, and Trash Panda moved on while the others, crumpled under rough robot-to-robot contact, suffered defeat. In the end, Trash Panda earned first place, Robo Rat second, and Katch third.

But it wasn’t all about the trophies. Spectators also voted for the robot that demonstrated the most “character” in the evening’s matches. Here, too, team Trash Panda came out on top – their robot’s ability to home in on targets and persistently zap the competition won over the crowd.