For a team of scientists at the Howard Hughes Medical Institute’s Janelia Research Campus in Ashburn, Virginia, these numbers add up to a technical first: a high-resolution digital snapshot of the adult fruit fly brain.

Researchers can now trace the path of any one neuron to any other neuron throughout the whole brain, says neuroscientist Davi Bock, a group leader at Janelia who reported the work along with his colleagues on July 19, 2018, in the journal Cell.

“The entire fly brain has never been imaged before at this resolution that lets you see connections between neurons,” he says. That detail is key for mapping out the brain’s circuitry – the precise webs of neuronal connections that underpin specific fly behaviors.

The Janelia team’s data offers a new tool for scientists racing to map these connections. And, in a memory center of the brain, the data also revealed a new cell type and other surprises. “Any time you look at images with higher resolution and more completeness, you’re going to discover new things,” Bock says.

The mind of a fly

Fruit flies, or Drosophila melanogaster, may be best known for buzzing around ripe bananas. But these tiny insects are surprisingly sophisticated, Bock says. “They can learn and remember. They know which places are safe and dangerous. They have elaborate sequences of courtship and grooming.”

Bock wants to figure out how it all works.

The fruit fly brain, roughly the size of a poppy seed, contains about 100,000 neurons (humans have 100 billion). Each neuron branches into a starburst of fine wires that touch the wires of other neurons. Neurons talk to one another through these touchpoints, or synapses, forming a dense mesh of communication circuits. 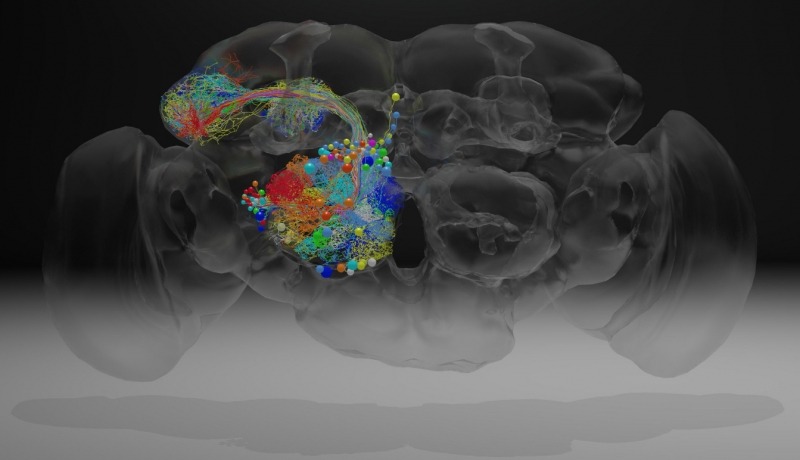 Scientists can view these wires and synapses with an imaging technique called serial section transmission electron microscopy. First, they infuse the fly’s brain with a cocktail of heavy metals. These metals pack into cell membranes and synapses, ultimately marking the outlines of each neuron and its connections. Then the researchers hit slices of the brain with a beam of electrons, which passes through everything except the metal-loaded parts. “It’s the same way that x-rays go through your body except where they hit bone,” Bock explains.

The resulting images expose the brain’s once-hidden nooks and crannies.

Electron microscopy has, historically, been a slow process. A decade ago, collecting the millions of images necessary for viewing the entire fly brain would have been out of the question, Bock says. “Imagine taking 21 million pictures with your iPhone,” he says. “You’d be sitting and clicking for decades.”

He and a crew of scientists developed new tools to speed up the process. The team used high-speed cameras and two custom-built systems to rapidly move tissue samples in eight-micrometer increments, allowing them to quickly capture images of neighboring areas. They were able to image an entire brain slice in less than seven minutes – five times faster than the previous high-throughput transmission electron microscope camera array, TEMCA1. Bock and his colleagues also benefitted from a custom robotic loader built at Janelia that picks up and places samples automatically.

Creating such cutting edge technology was no small feat, Bock says. The work required the collaboration of dozens of Janelia neuroscientists, mechanical engineers, and software developers, as well as engineering consultants and scientists at Johns Hopkins University and the MRC Laboratory of Molecular Biology. After a long informal collaboration between these scientists, a formal Janelia project team co-managed by Bock and Janelia software engineer Khaled Khairy was created in 2016 to push the effort to completion.

Without the entire team, Bock says, the study wouldn’t have been possible. “This is an ‘only-at-Janelia’ kind of enterprise.”

The millions of images Bock’s team collected and stitched together offer an in-depth look at the fly brain – and the chance to explore uncharted areas.

Bock’s team traced the paths of neurons that reach out to the mushroom body, a region involved in memory and learning. These cells, called olfactory projection neurons, have been well described previously, using light microscopy. Manually tracing the outlines of these neurons and all their wirelike projections let Bock’s team confirm the quality of their image data.

And, he says, “We stubbed our toe on some interesting new things as well.”

Olfactory projection neurons send messages to neurons called Kenyon cells. These cells, in turn, talk to different sets of neurons. Until now, scientists hadn’t identified Kenyon cells’ conversation partners in a region of the mushroom body called the calyx. Bock’s team pinpointed some of these neurons, as well as a previously unknown brain-spanning neuron that also relays information to Kenyon cells.

Using imaging data from a transmission electron microscope, scientists have reconstructed a subset of neurons in the female fly brain. The work revealed a new cell type (orange skeletons) that sends information to Kenyon cells in a memory center of the brain. Credit: Z. Zheng et al./Cell 2018

The olfactory projection neurons also appeared to be more tightly bundled together than scientists had thought, Bock says. This bundling suggests an orderly structure in something once believed to be largely random.

A better understanding of this brain circuitry could give scientists insight into fly behavior, Bock says. “We think it will tell us something about how the animal learns – how it associates odors with a reward or punishment,” he explains.

Now, more than 20 lab groups are digging into the new dataset, tracing neurons and outlining the brain’s circuitry. Bock calls the data a resource that’s free to be mined by neuroscientists probing the mind of the fly. “It adds another tool to the toolkit we’re using to understand this animal.”

Users can download the fly brain dataset at http://temca2data.org.

* These authors contributed equally to this manuscript.