A new molecular engineering technique has the potential to double the number of light-sensitive proteins available for studying brain circuits. 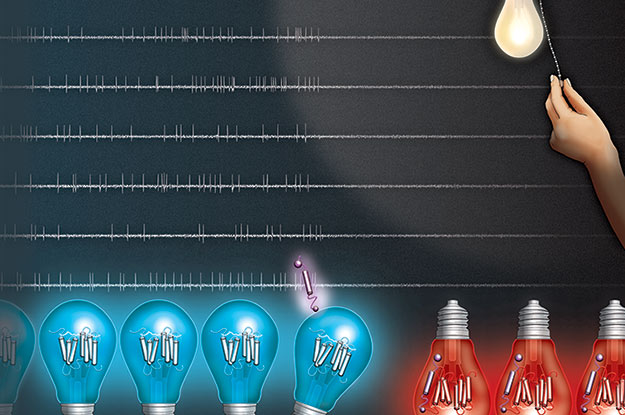 Controlling individual brain cells using light-sensitive proteins has proven to be a powerful tool for probing the brain’s complexities. As this branch of neuroscience has expanded, so has the demand for a diverse palette of protein tools.

A multidisciplinary team of 14 researchers from the Howard Hughes Medical Institute’s Janelia Research Campus and other institutions found a new way to engineer these proteins, called rhodopsins. By flipping proteins in the cell membrane upside down, the scientists were able to generate tools with distinct properties, they report October 18, 2018 in the journal Cell.

The technique could double the number of proteins available for optogenetics – a technique for manipulating the activity of neurons with light. The newly developed rhodopsin hybrids are already enabling new experiments at Janelia, helping researchers dissect brain circuits and study the neuroscience behind treating Parkinson’s disease.

To date, scientists have had two main ways to find new proteins for optogenetics. One is by discovering them in nature through genome mining. The other is by gradually mutating proteins until they have desirable features. Each approach has strengths, but also limits in its ability to provide the full suite of characteristics neuroscientists need for increasingly precise experiments.

Inspired by evolution, the multidisciplinary Janelia team, led by Jennifer Brown, Reza Behnam, Luke Coddington, and Gowan Tervo, developed a complementary technique for engineering new rhodopsins. In addition to mutation, protein diversity arises in nature when proteins change through recombination – combining protein domains with distinct functions through the reshuffling of genes. Scientists think recombination was critical for the emergence of a subset of proteins that have altered their orientation in the cell membrane through evolution.

Even though flipped proteins exist in nature, conventional wisdom suggests that engineering one is next to impossible. Proteins have shapes finely tuned for their orientation in the membrane, and they usually fail to form functional proteins when researchers try to change them in the lab.

Yet when the Janelia researchers mimicked recombination by adding a new protein onto one end of a rhodopsin, it flipped upside down. “We were actually surprised how easy it was to flip any rhodopsin we like,” says Janelia Senior Group Leader Alla Karpova.

If every existing engineered or discovered rhodopsin obtains a new function when flipped, that could lead to a doubling of the protein tools available for optogenetics, she says.

Not only could the team change the orientation of proteins, but they also found that the new rhodopsins had unique and useful new functions. One, named FLInChR (Full Length Inversion of ChR), started as a rhodopsin that activates neurons. When flipped, it became a potent and fast inhibitor that has enabled new experiments.

“We always want to be creating new tools so that we can do any experiment we dream up,” says Janelia Senior Group Leader Joshua Dudman. “Being able to diversify your toolkit is a really critical piece for continuing to push neuroscience forward.”