A new study traces the neural circuit that makes a female fly receptive to a mating advance. 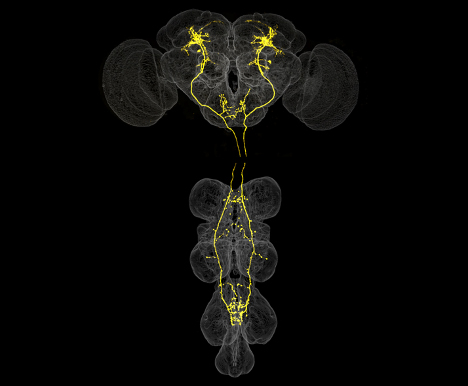 The female fruit fly has discerning standards for her sexual partners: She’ll only signal that she’s ready to reproduce once a male fly has serenaded her with the proper courtship song. Now, new research from scientists at HHMI’s Janelia Research Campus identifies the neural pathway that controls female flies’ receptivity to mating. Led by research scientists Kaiyu Wang and Fei Wang, in the lab of group leader Barry Dickson, the team traced the pathway that directs the fly’s vaginal plates to open – a sign she’s ready to partner up.

“We’ve identified almost the whole circuit,” says Kaiyu Wang. The pathway integrates messages from two different sets of neurons: neurons that encode whether the fly has already mated, and neurons that are tuned to the sound of the specific courtship song sung by males of her species. If she’s paired up recently, or if she’s wooed by a different species of fly, the neurons that open her vaginal plates don’t fire and the plates remain closed, the team reports November 25 in the journal Nature. But when the fly is still seeking a mate and she hears the song of her species, those signals combined trigger the vaginal plates to open. The next step is to figure out exactly how the fly’s brain encodes the male courtship song, and how it distinguishes between songs of different species.