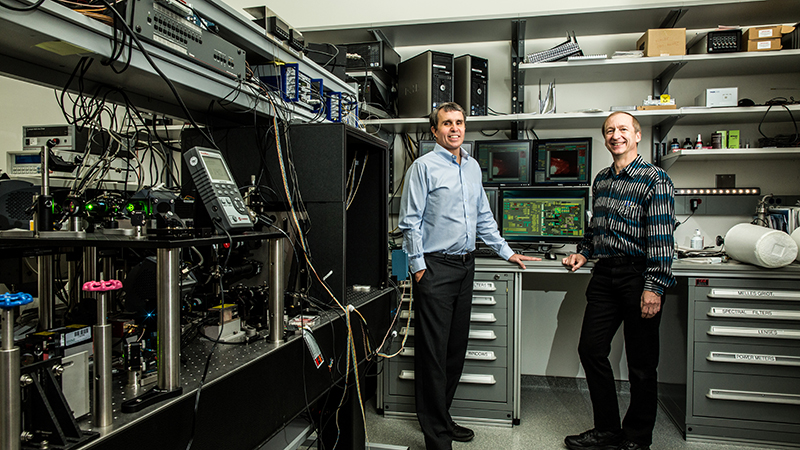 Janelia Senior Group Leader Harald Hess has been awarded the 2023 James Prize in Science and Technology Integration from the National Academy of Sciences for his groundbreaking work in optical and electron microscopy.

The James Prize honors outstanding contributions made by researchers who adopt or adapt information or techniques from outside their fields, integrating knowledge from two or more disciplines to solve a major contemporary challenge not addressable from a single disciplinary perspective. The prize was established in 2020 by Robert James, a former chairman and CEO of McCann Erickson Worldwide and member of the National Academies’ Presidents’ Circle, and carries with it a $50,000 prize.

Hess, who was been at Janelia since we opened in 2006, has had a prolific career fusing ideas from different scientific disciplines and industry to conceive, develop, and implement new microscopy techniques that have transformed the fields of physics and biology. Hess co-invented photoactivated localization microscopy (PALM) with Janelia Senior Fellow Eric Betzig and created an interferometric version of super-resolution optical microscopy called iPALM to bring optical resolution to the level approaching that of electron microscopy. He and his team also developed and optimized super-resolution 3D optical microscopy and high-throughput 3D electron microscopy to transcend bioimaging challenges, enabling neural circuit reconstruction, full-cell imaging, and the merging of data from scanning electron and 3D optical fluorescence microscopy.