Scientists have identified proteins in aphid saliva that can alter plant development. These proteins drive abnormal growths called galls, which give insects a protected place to feed and reproduce.

These structures, called galls, have fascinated biologists for centuries. They’re crafted by a variety of insects, including some species of aphids, mites, and wasps. And they take on innumerable forms, each specific in shape and size to the insect species that’s created it – from knobs to cone-shaped protrusions to long, thin spikes. Some even resemble flowers.

Insects create galls by manipulating the development of plants, but figuring out exactly how they perform this feat “feels like one of the great unsolved problems in biology,” says David Stern, a group leader at the Howard Hughes Medical Institute’s Janelia Research Campus. “How does an organism of one kingdom take control of the genome of an organism in another kingdom to completely reorganize its development, to produce a home for itself?”

Now, Stern and his colleagues have identified the first examples of insect genes that directly guide gall development. These genes are turned on in aphids’ salivary glands and appear to direct gall formation when the insects spit their saliva into the plants. One gene the team identified determines whether such galls will be red or green, the researchers report in a paper published March 2 in Current Biology.

“I think they've discovered essentially new territory,” says Patrick Abbot, a molecular ecologist at Vanderbilt University who wasn’t involved in the work. There’s a strong likelihood that similar genes are found in other insects, he says. “It makes me want to run to the lab and start looking back through my data.”

Figuring out how to study gall formation has been a longstanding challenge, Stern says – one that’s interested him since he was a graduate student doing fieldwork in Malaysia. Gall-making insects aren’t laboratory model organisms like fruit flies, and not as much is known about their genetics.

A few years ago, while wandering the woods of Janelia’s riverside campus, Stern made a convenient observation. Hormaphis cornu aphids make galls on witch hazel trees, small flowering trees that are abundant on campus. Even on a single leaf, Stern noticed, some Hormaphis aphids were making green galls, while others were making red ones. It set up a natural experiment ­– a chance to compare two visibly distinct kinds of galls and figure out what’s genetically different between the aphids that make them.

When Stern and his team sequenced the genomes of aphids that made green galls and those that made red galls, they pinpointed a gene that varied between the two genomes. Aphids with one version of a gene that they named “determinant of gall color” made green galls; aphids with a different version made red ones. The finding piqued their curiosity, as the gene didn’t look like any previously identified genes. 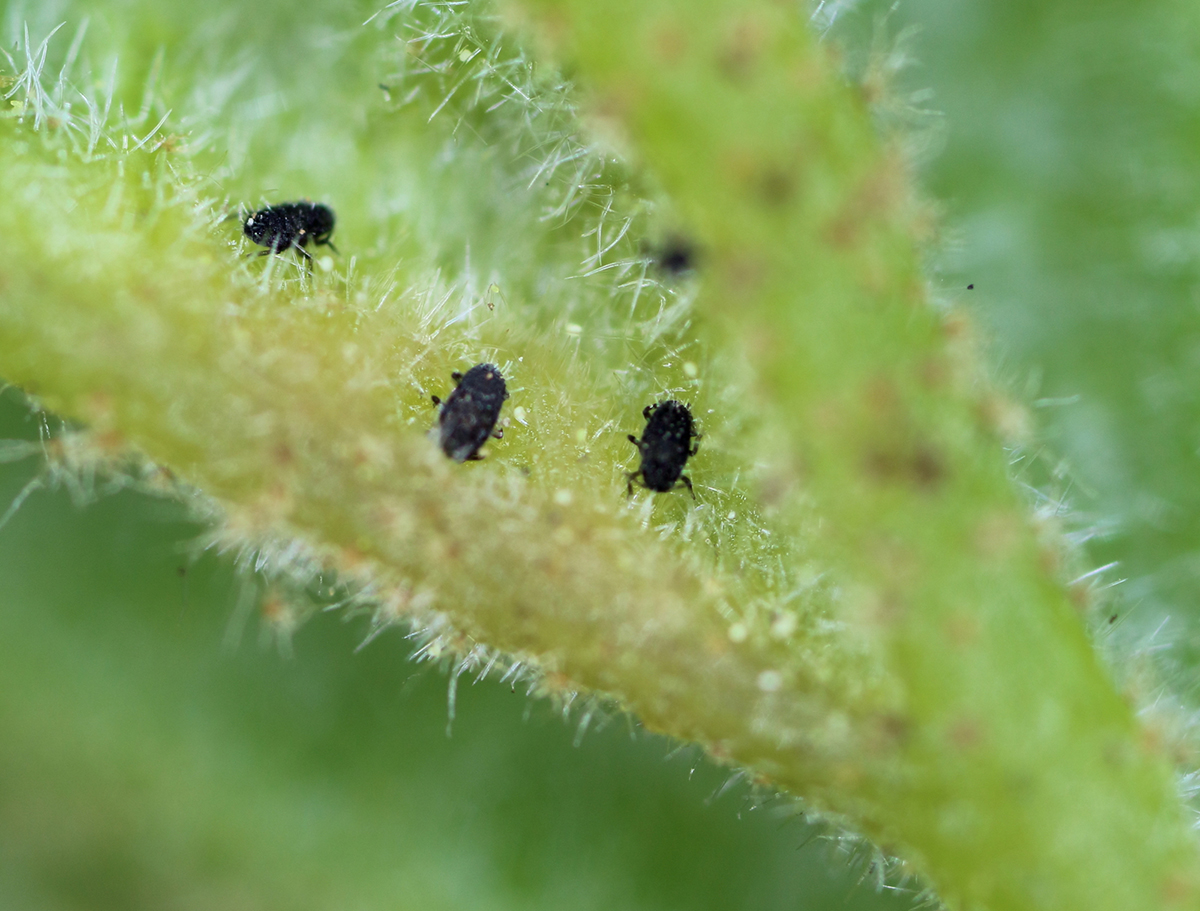 To dive deeper, they collected aphids from both witch hazel trees and river birch trees. (Hormaphis cornu aphids live on river birch trees in the summer, but don’t make galls there.) Back in the lab, the researchers carefully dissected out the insects’ tiny salivary glands. In these glands, the team hunted for genes that were turned on only in the aphids that made galls. The researchers found that the gene determinant of gall color was similar to hundreds of other genes that were all turned on specifically in the gall forming aphids. Stern’s team dubbed this group bicycle genes.

The gall-making aphids on the witch hazel trees switch on these genes to make BICYCLE proteins. The insects might spit these proteins into plant cells to reprogram leaf tissue into making a gall instead of normal plant parts, says Aishwarya Korgaonkar, a research scientist in the Stern lab who helped lead the project.

“This is a beautiful bit of biology,” says Sam Mugford, a plant scientist at the John Innes Centre in Norwich, England who wasn’t involved in the research. “The exciting work ahead will be to understand the molecular processes that are going on inside the plant when the proteins are delivered by the aphid.”

The team is now working to identify the plant molecules targeted by the aphids’ BICYCLE proteins, says Korgaonkar. That could help them understand just how BICYCLE proteins goad plants into forming galls.

“After years of wondering what's going on, it’s very rewarding to have something to show for it,” Stern says.