Do fly larvae have the neural machinery to avoid ill winds, or do they simply drift where the breeze takes them?

A team led by Janelia Research Scientist Tihana Jovanic from the Zlatic Lab set out to answer that question in a new study that placed larval flies in a breezy experimental arena. The work, published February 7, 2019, in the journal Current Biology is the first to look at the neurobiology of Drosophila larvae as they navigate wind speed gradients.

The researchers identified seven neurons and parts of the neural circuitry involved in this navigation. The study helps piece together how animals use their senses to make decisions about the direction of movement, Jovanic says. Neuroscientists have identified some of the neurons behind crawling toward or away from cues like light and odor, but they haven’t fully picked apart the main neural circuits involved. 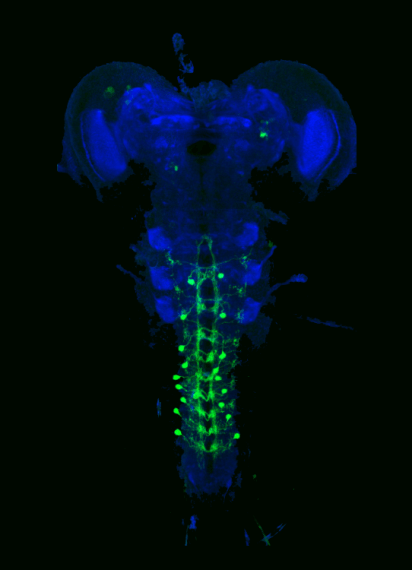 In fact, until now, Jovanic says, no one even knew whether and how fly larvae navigate wind gradients. To find out, she and her colleagues placed larvae in a small arena and delivered low-speed puffs at one end and high-speed puffs at the other. The highest winds were similar to a strong breeze.

Using behavioral monitoring software to track 830 larvae, the team discovered that the larvae regulate the probability, direction, and magnitude of turns to crawl toward low wind speeds.

By turning individual neurons on and off, the team discovered seven that were involved in avoiding high wind speeds. Two sensory pathways, located in different parts of the nervous system, play a role in fly larvae’s response to wind. Some of the neurons are located in the larvae’s ventral nerve cord, while others are located in the brain.

“I think that’s the most interesting aspect,” says Jovanic, now a group leader at the Paris-Saclay Institute of Neuroscience. To understand fly larvae behavior and neurobiology in a wind gradient, she says, “We will have to look at the entire nervous system.”

The team’s next step will be figuring out where the neural pathways in the brain and the ventral nerve cord intersect. That could bring researchers closer to fully mapping the neural circuitry behind how animals decide to seek out more favorable conditions.