This video shows a pathway from compass neurons in the ellipsoid body going up to a structure called the protocerebral bridge, where they make synapses onto neurons that project to premotor circuits on either side of the fly’s brain. These neurons are thought to modulate the fly’s turning actions.

Just over a year ago, a team of Janelia scientists completed the most detailed wiring diagram yet of the fruit fly brain. In collaboration with Google, they’d traced the paths of some 25,000 neurons — about a third of the fly brain, by volume — and pinpointed the roughly 20 million places where the neurons connected. It was a major milestone en route to their bigger goal: to map the entire fly brain in the same level of detail.

The final push for that full map is still ongoing. But now, in a pair of papers published in the journal eLife, Janelia researchers show how the connectome data that’s been collected so far is already accelerating neuroscience research. The papers apply the connectome data to parts of the brain involved in learning, memory, and navigation. They link brain structure to function, identifying the neural circuits that control specific behaviors and showing how different brain regions communicate with each other in new levels of detail.

Collectively the length of a book, the papers are a detailed and thorough resource for the community of scientists who study the fly brain. And more broadly, they’re evidence for the value of creating a connectome, says Gerry Rubin, Janelia’s founding executive director.

Fifteen years ago, when Rubin first began to champion the idea of making such a detailed map of the fly brain, many were skeptical. The project would take years of effort, millions of dollars, and dozens of people. But Rubin felt the payoff—a resource no individual lab could dream of creating alone—would be worth it. It would let scientists expand their view of the brain beyond the circuits that have already been individually mapped, and predict roles for never-before-studied neurons based on their connection points in the brain.

With more than 250 figures, the new papers provide examples of those applications in spades. 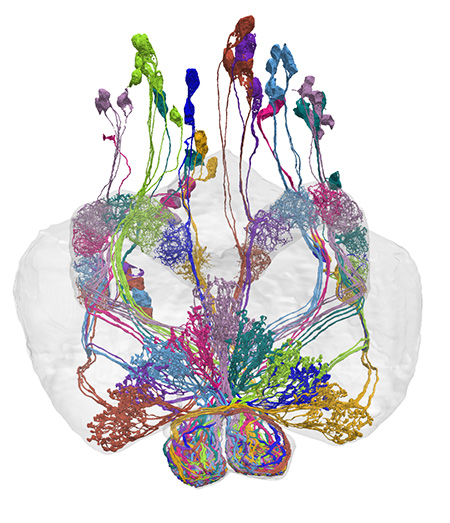 One paper, led by Rubin, walks through the mushroom body, a brain region involved in learning and memory. Another, led by senior group leader Vivek Jayaraman, uses the connectome to explore the central complex, a region that helps flies navigate.

The new papers allow researchers to deduce neurons’ roles by looking at the brain areas that they connect — and then get more targeted ideas for experiments down the road.

“We found neurons we’ve never seen before—and the only way that we’ve been able to identify them is because the connectome tells us their partners, which uniquely identifies them, says Jayaraman, who leads Janelia’s Mechanistic Cognitive Neuroscience research area. “And those connectivity patterns suggest that these neurons are involved in amazingly sophisticated computations.”

Fly researchers have been studying the mushroom body for more than 20 years, Rubin says, publishing more than 2,000 papers about this small structure. But even in such a well-trodden field, the connectome answers questions about how the brain is put together.

“We could now look at the connectome and say, can we explain how that works? And in fact, we found a lot of new things.” Rubin says.

Collectively, the findings suggest that the fly can perform more complicated memory tasks than previously thought, Rubin says. “It took an intense effort of many people, including anatomists, biologists and theorists, working together over several months to begin to make sense of all these data.”

Meanwhile, Jayaraman’s team applied the connectome to a less well-studied brain structure, the central complex. Before the connectome was published, his lab was piecing together the neural circuits that orient flies within a landscape. These circuits integrate visual cues – what the fly is looking at—with other sensory information like wind direction, helping a fly keep track of where she is in space and where she might want to go.

Via the connectome data, the team could see that neurons carrying these different sensory cues don’t just talk to the central complex — they also talk amongst themselves. That creates a hierarchy among those sensory inputs, where some are sending stronger signals to the central complex than others. “Some neurons are suppressing activity in other neurons that are tuned to different, less preferred, cues,” says Hannah Haberkern, a postdoc in Jayaraman’s lab. The data give clues to how the fly brain is prioritizing different kinds of information to make spatial judgments. 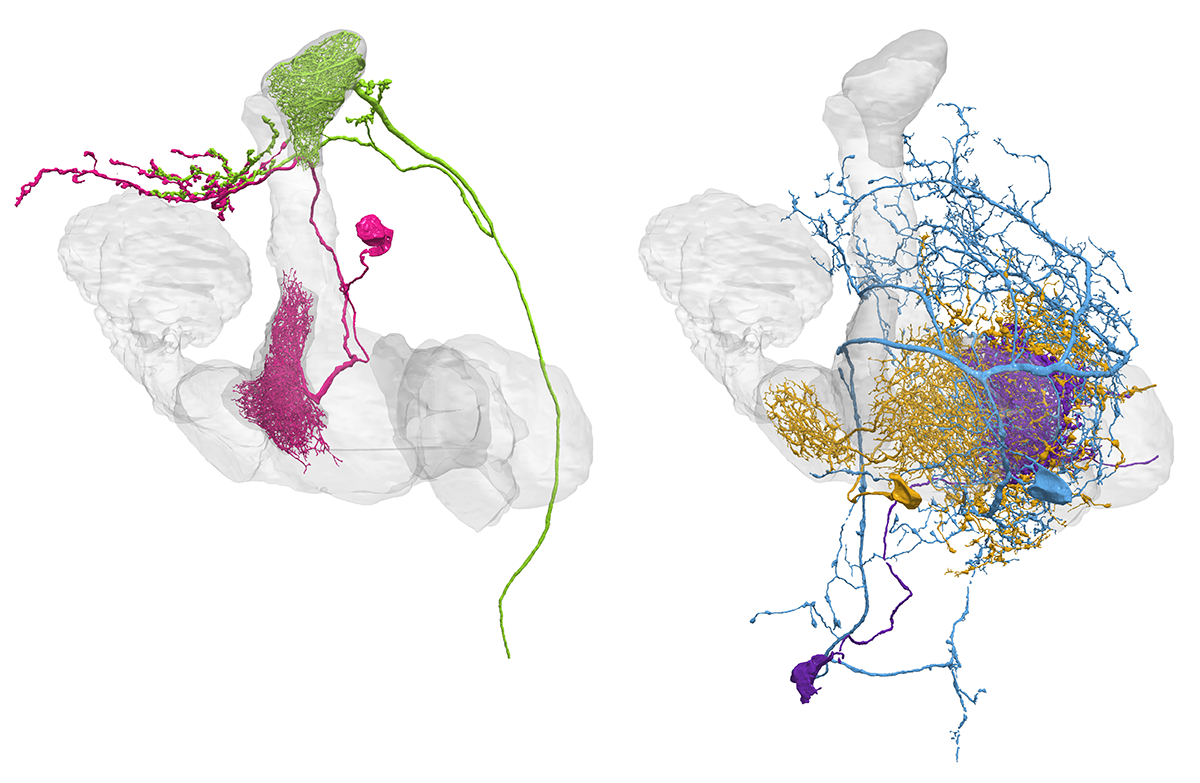 The team also identified circuits that appear to help the fly plan movements. Past research has shown how sensory cues help a fly figure out which way her head is pointed in space. But her head might be turned relative to her body, making planning more complicated. “Flies really want to know which way their entire body is moving,” says Brad Hulse, a postdoc in Jayaraman’s lab. “And the connectome suggests ways they could do that.” The circuit structure suggests that flies can account for the different orientations of their head and body, to compute a direct route to a food source or other target.

The papers are a resource for neuroscientists studying memory and navigation, but the researchers hope the impact goes further, too. AI researchers trying to design artificial neural networks might learn from the structure of the fly brain and the way it’s built, Jayaraman suggests.

The fly brain is “an incredibly, beautifully structured network,” says Jayaraman. Artificial neural networks must learn the simplest things from scratch, he says, but the fly brain comes pre-loaded with circuits for fundamental behaviors. "Evolution has done the training for you--and you can see that in the connectome," he says.

While Rubin and Jayaraman’s teams have plunged deep into just a few areas of the fly brain, there’s a vast neural landscape still waiting to be explored. And it’s more accessible than ever.

With the connectome data in hand, “some undergraduate who had a great idea could write a paradigm-shifting paper in neuroscience by mining this data,” says Rubin. “It’s democratized it and made a new tool accessible to everyone.” 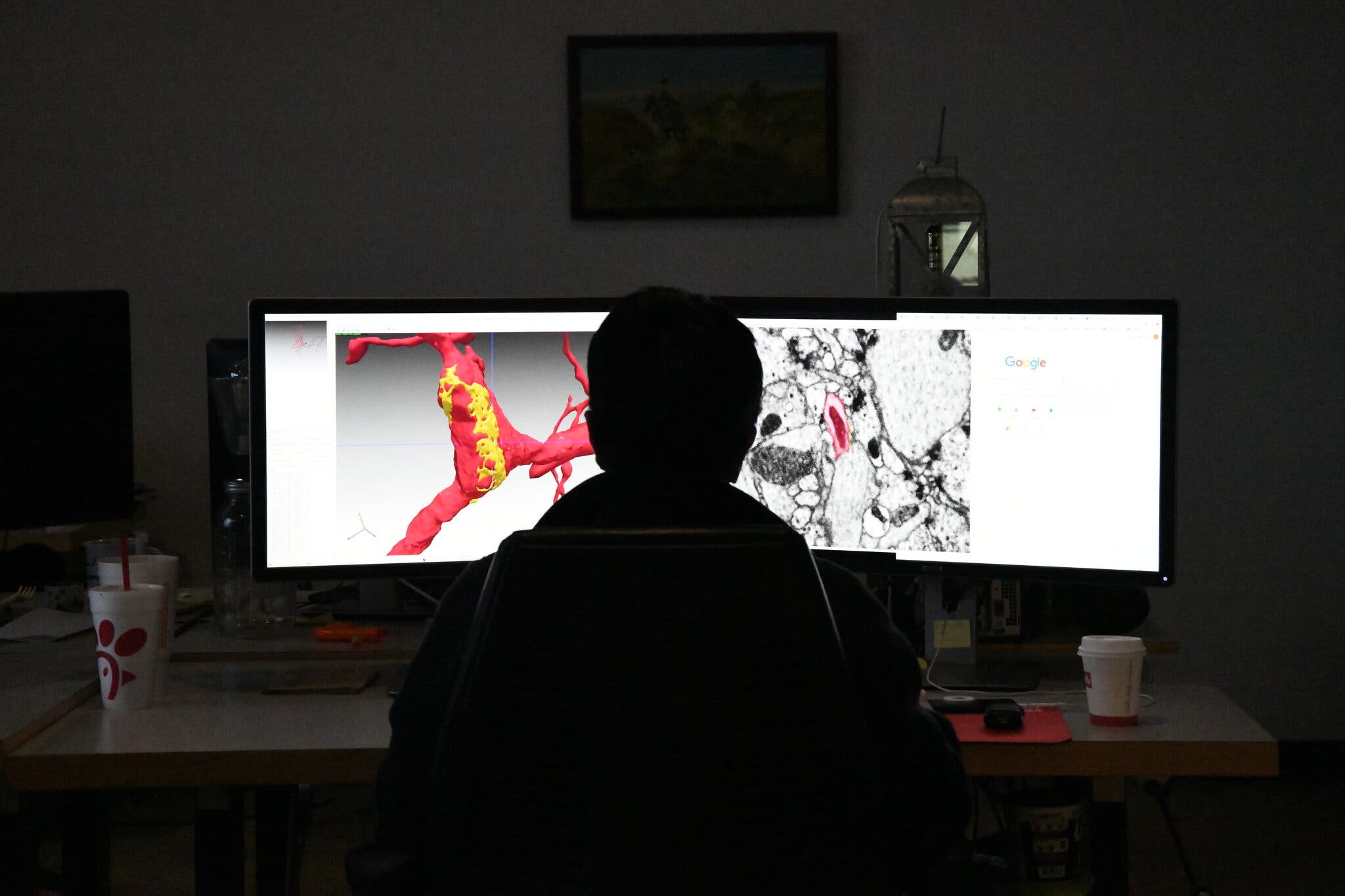