Isabel Espinosa Medina is first and foremost a scientist, but her other passion is evident even in her work. A tool she developed as a postdoctoral researcher at Janelia to distinguish different generations of cells is named TEMPO – a familiar term to Espinosa Medina, who is also an accomplished violinist and still finds time to play with a local orchestra. We sat down with Isabel to learn more about her research, her music, and her transition from postdoc to group leader at Janelia. 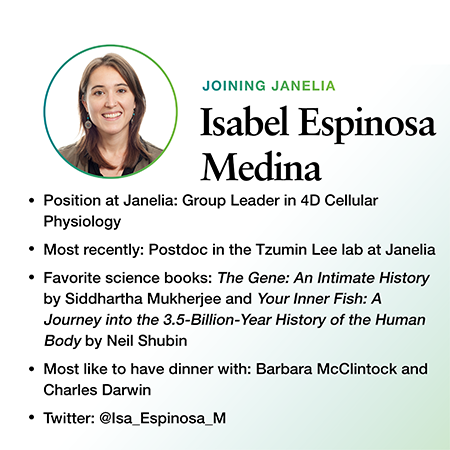 HHMI Janelia: Tell us a little bit about your current research and what you’ll be doing going forward as part of the new 4DCP research area.

Isabel Espinosa Medina: For a long time, I’ve been fascinated with development and how organisms become what they are, from progenitor cells that divide, interact with each other, and then form a functioning organism. And since I started my PhD studies, I have been focusing on how the neurons of the periphery of our bodies form and how they connect with different organs of the body to modulate their function. I have been doing these studies in mice, and more recently, I’ve started moving to zebrafish as a model system because they are transparent and that allows for really, really cool imaging.

One of the problems I encountered when I was a PhD student is that we didn’t have genetic tools to label neurons that arise at different time points during development with different colors. I wanted a tool to distinguish those neurons – for example in the periphery, some neurons go to the gut and some go to the heart, and they arise at very different times. When I started a postdoc here at Janelia, I started to build some genetic tools in the lab of (former Janelia Group Leader) Tzumin Lee, with the goal of solving that. And I finally developed a tool called TEMPO that is allowing us to see different generations of cells with different colors. And so now, when looking at the brain, for instance, you can see the neurons that form first with a blue color, the subsequent generations are red, and then the next ones are yellow. And that way, you’re able to see where they get positioned, how they interact, and so on.

So now in my own lab, I want to take on this dream of combining both this new technique and my neurodevelopmental knowledge in zebrafish and mice and look at how the nervous system finds the different organs of the body during development. I want to figure out how neurons and cells of the organs connect, specifically focusing on the pancreas and the gut. This way I would define how the nervous system and the organs influence each other during development and in disease states. 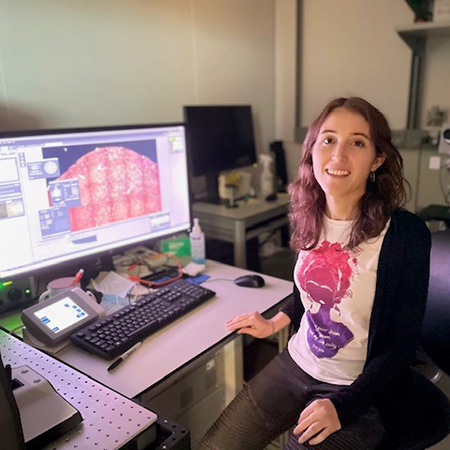 HJ: What drew you to apply for this position in 4DCP, and what is exciting to you about being part of this new research area?

IEM: For me, it was incredible that something I had dreamed of was going to happen here. I’ve always dreamt of understanding - and ideally, visualizing - how tissues and organs are built and how they work together to allow organismal physiology. So when I saw that there was an interest in cellular physiology at the organismal level, and an interest in doing more work in zebrafish and mice at the tissue molecular level, I thought, well, this is the perfect place. Because there’s the cutting-edge microscopy, there are incredible tool builders as well as experts in neuroscience and cell biology. So I just had to apply. And, because I’ve been working here for a while, I know how well people work, how efficient everything is, how helpful everybody is.

HJ: Do you have any favorite places on campus?

IEM: The surroundings, I really love it. I mean, looking outside right now especially, it’s beautiful. It’s all green. I come from big cities. I was born in Madrid and then moved to Paris for several years. Everything was buildings and very beautiful places as well, but here you go out in nature, and literally cross paths with deer and squirrels and rabbits every 10 minutes. So I really enjoy that – taking a coffee, maybe after lunch, and just doing a tour around the pond. And then of course the fact that you can interact with people so easily in Bob’s, for instance. I have missed it a lot during COVID because that was part of the fun. Here it’s much easier to just talk in a very informal way and learn more about what others are doing, compared to other academic institutions, for instance, where I have been.

HJ: You have played the violin since you were 7 years old. Did you ever think about pursuing a career in music instead of science?

IEM: That was the other big decision in my life, but it was very early on when I hadn’t even started my career in biology. I thought it was a bit too early to restrict everything to music – it is a very hard career, especially when you play the violin, it can get extremely competitive. I wanted music to remain my passion, something I enjoy and is there no matter what other career path I follow.

And I was also very passionate about biology. I was always very fascinated by genetics. When I was in high school, I had an incredible teacher and I guess from that moment on, I decided to study biology, so I could have a broader view, not only of genetics, but also of other things I enjoyed very much, like animal and plant physiology. But everything can go back to that teacher who was really, really good and who taught me how important is to have a good mentor.

HJ: Do you have any advice for the other new group leaders coming to Janelia?

IEM: I would say to not get overwhelmed by the possibilities. That was the main thing that impressed me when I first arrived at Janelia – it seems like the limit is yourself, compared to other places. And it can be a bit overwhelming. So just to take it step by step and talk to everyone, try to meet everyone, and see how they think about science, because you learn from everyone something new. So it’s really interesting. And also to go for a walk every now and then to the island, to just think about science, but in a more relaxed way. 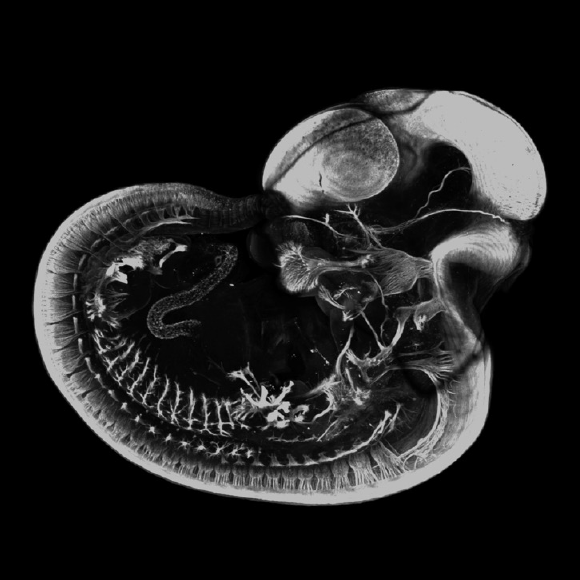 Espinosa Medina Lab | Our goal is to understand how the nervous system and the cells of organs, specifically the pancreas, interact during development and in disease states. We use state-of-the-art imaging and genetic tools for temporal manipulation of cells in zebrafish and mouse.