The college entrance exam in China is notoriously difficult, yet Shaohe Wang’s high school chemistry teacher made it fun, telling his students about the stories and history behind the science. These stories lit a spark in Wang, leading him to read about the debates in quantum mechanics and become more interested in science. Later mentors – including the husband-and-wife team of Karen Oegema and Arshad Desai at the University of California, San Diego, and Kenneth Yamada at the NIH – provided Wang with the solid scientific research skills that he is looking forward to bringing to his own lab at Janelia. We sat down with Wang to hear more about his research, including his fascination with the salivary gland and his love of zebrafish. 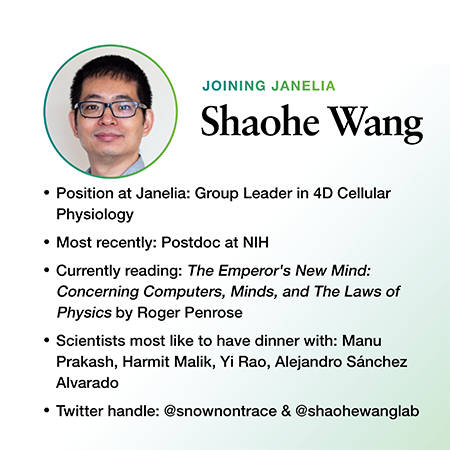 HHMI Janelia: Tell us about your research.

Shaohe Wang: Our lab is interested in trying to understand how mammalian organs are built by cells and matrices. When I say matrices, I’m talking about the extracellular matrices. A lot of times when we think about biology, we say we are made of cells and ignore another large part, which is the extracellular matrices. Collagen is very well known, but there are other things, like fibronectin and other structures, that are important for organ building. So fundamentally we’re interested in the dynamic interplay between the cells and the matrices – how they build organs. Our unique perspective is our emphasis on reconstitution. We frequently challenge ourselves to reconstitute parts of the complicated process from neutral building blocks. This is a powerful approach for understanding principles as well as for bridging basic research to bioengineering.

Partly why our lab believes Janelia is the best place for this research is because we love live organ imaging, live cell imaging. And Janelia has the best microscopy support on the planet. So we can really make use of these resources and take our research to the next level.

The type of organs I’m particularly interested in are the so-called branch organs – the organs with a tree-like structure. The most famous examples are the lung and the kidney. But I’m using the mouse embryonic salivary gland as a model.

HJ: Why the salivary gland?

SW: In its early stage, the salivary gland is a clump of cells, not a single layer. If you look at the cell movement, it’s chaotic movements, random movements. The cells seem to not know where they’re going but order does arise from this behavior, which is an intriguing process to study.

We’re just trying to understand the principles for now, but in the end, we want to make artificial organs to replace defective branched organs in patients. The sensible starting point would be some type of stem cells. But those cells, when you culture them in the dish, always start from clumps, like an aggregate. In scientific jargon, it’s called stratified epithelium. It just means they’re not a single layer, but instead are multiple layers. So it makes sense to get some insights from a natively stratified epithelial organ, such as a salivary gland, so that we can really look into the mechanism of this initially disordered structure, how order emerges and it eventually becomes a beautiful, hierarchical branched organ. 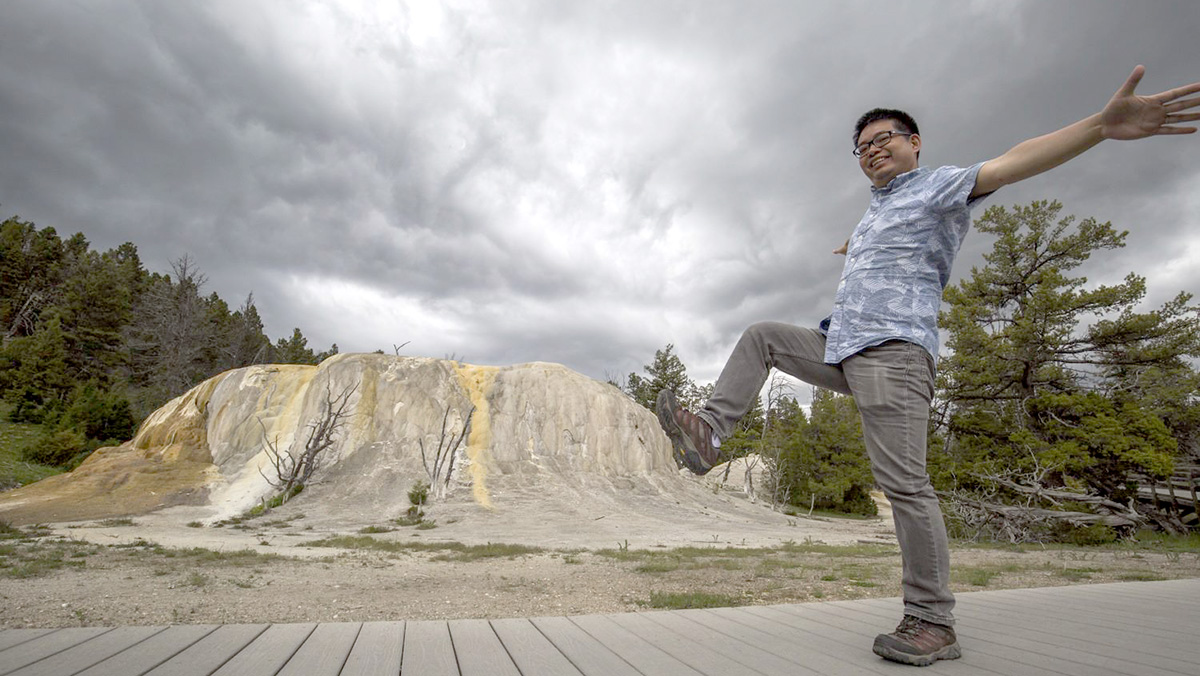 HJ: What excites you about joining this new research area, 4DCP?

SW: I feel I’m so lucky to have been searching for my next job when the 4DCP program is starting.

When I saw that job ad, I was like, wow, this seems to be tailored for me. So I just feel super excited about the vision of 4DCP. I feel we now have the right tools to answer a lot of questions that previously people wanted to ask, but they could not. Now we have super fancy microscopy, and we have a lot of sequencing-based techniques. We have CRISPR for genome editing and manipulation. We have proximal labeling methods for proteome profiling. So I think we’re at this exciting historical point where we can really do something with the resources provided at Janelia.

I’m so impressed by my future colleagues’ research. The leaders at Janelia are definitely spectacular. And while I was interviewing, I felt like this symposium style of interview was a lot of fun. Or maybe it was Janelia that made it more fun than some other places. But I got really excited about that symposium, where everyone is doing super exciting research. I felt like, oh, I would be so grateful if I could work with these people to discuss science, to push a general field forward together at Janelia. So yeah, the colleagues are definitely something I value a lot.

Janelia provides, of course, this very unique program. No grant writing, no teaching, basically no distractions – you just focus on your research. Focused research time is something I value a lot. So I should say, I haven’t experienced any kind of other styles. But by exploring this, talking with different people, I just feel this will be like a paradise for 10 years.

HJ: What made you get interested in your current research?

SW: In college, we had to find a lab where we would do our thesis. And I was super intrigued by this lab led by Anming Meng doing zebrafish research. Like: Huh, zebrafish. That’s cool. Let me explore this lab.

And once I got into the lab, I saw what they can do with some molecular tools, how you manipulate the zebrafish with the genetic tools. I’m a really visual person, so I loved being able to see the single cell fertilized egg develop. I think if you YouTube it, there’s a movie of a zebrafish embryo developing from one cell to a pretty late stage, in like, 24 or 48 hours, to where you have a swimming fish. You can see that happen in real time – like, in the early morning and later in the day, it’s so different.

And when they hatch, those zebrafish larvae, they are so cute. I just love looking at that. And I can't stop thinking about how this really happens. How from a single cell, a simple thing that harbors all the information elaborately unfolds into this complex organism that will go on and on. It’s just amazing.

So I think from that point on, I stayed in the general field of developmental biology. And maybe I have changed the model organism just because I want to explore more.

HJ: What are your interests outside the lab?

SW: I love photography. I picked this up in college, and later on, I got more and more avid. And once I started to make my own money, I bought some better cameras and lenses and got into certain types of photography. I do portrait photography and also landscape and insects – little things, like you get a zoomed in view of what’s going on. Well, I guess that’s not surprising. It’s kind of related to what I’m doing in my research – microscopy and photography.

I have another hobby: reading a particular manga series, called One Piece. I’ve been following it since back in college. It’s a great series that I highly recommend for everybody. It’s a story of pirates, and it’s really fun.

I also am a regular morning runner. For the past few years, I have been running 2 to 3 miles in the morning on most days of the week.

Wang Lab | We combine embryonic and reconstitution approaches to investigate how mammalian organs are built by cells and extracellular matrices.