The Looger Lab and the GENIE Project Team at HHMI Janelia have developed a new suite of jGCaMP8 calcium indicators, built on the GCaMP scaffold.  The jGCaMP8 sensors have fast kinetics without compromising sensitivity, setting a new standard for in vivo imaging. Sensors that have been extensively tested in mammalian neurons in vivo and in vitro are:

The plasmids are available on Addgene!

jGCaMP8-expressing flies are now available from The Bloomington Drosophila Stock Center. Search for "jGCaMP8" to see all available strains. See results of testing in Drosophila below.

Addgene is currently handling the distribution of jGCaMP8 AAVs. See the latest list of available sensors/serotypes.

The GENIE Project team is providing other sensor/serotype combinations for reagents that are not available from Addgene. If you are interested in obtaining AAV aliquots, please fill out this form.

The jGCaMP8 sensors were imaged using a CCD camera (129 FPS) in the neuromuscular junction (NMJ) of larval Drosophila, using 470 nm excitation (panel a). Presynaptic boutons of motor neurons were stimulated at 1, 5, 10, and 20 Hz. Fluorescence responses of jGCaMP8f and jGCaMP8m (blue, red) at 10 and 20 Hz were dramatically more pronounced than jGCaMP7f (panel b).

We imaged jGCaMP8 and jGCaMP7f in Drosophila L2 neurons (panel a) with two-photon microscopy. These non-spiking neurons are part of the adult visual system and receive inputs directly from photoreceptors. The responses of jGCaMP8f and jGCaMP8m to long (1 s) as well as short (8 ms) dark flashes were faster and higher-amplitude than jGCaMP7f (panel b, c). 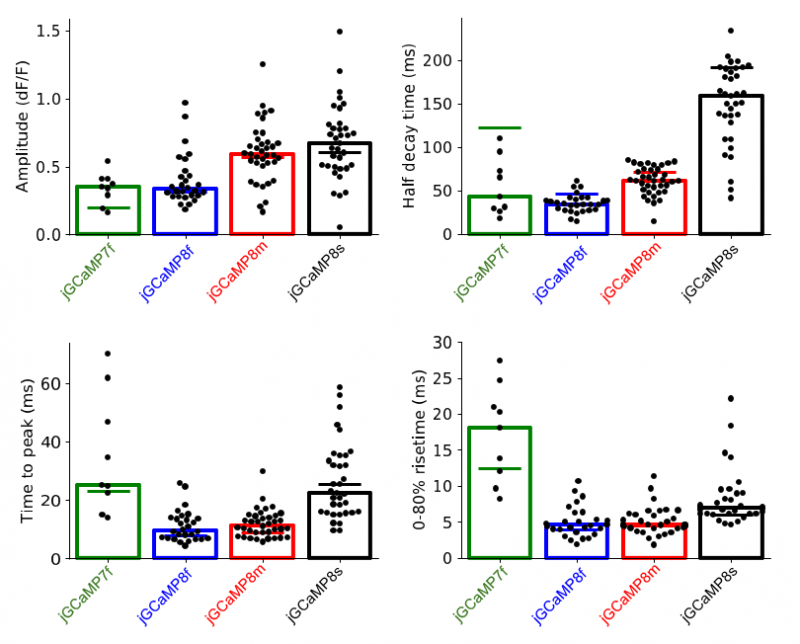 The following table summarizes the sensitivity and kinetics of the jGCaMP8 sensors in the GENIE field stimulation-based cultured neuron screen.

The plots below show the averaged performance of the indicators. We compared the jGCaMP8 family of sensors to previous sensors from our group (GCaMP6, jGCaMP7) as well as the newly released XCaMP indicators.

The plots are interactive so you can do head-to-head comparisons with any sensors, zoom in, and download the plots. Double-click on a legend entry to isolate it.

This figure shows the sensitivity and kinetics of the sensors (mean ±s.e.m.). For panels labeled (norm.), the responses of the sensors at each stimulus are normalized to those of GCaMP6s.

The plots are interactive so you can do head-to-head comparisons with any sensors, zoom in, and download the plots. Double-click on a legend entry to isolate it.

The jGCaMP8 indicators were purified for in vitro characterization of affinity, kinetics, and absorption.

A manuscript describing these GECIs is in preparation. In the meantime, these reagents and data are released pre-publication for your use. If you use these reagents in your work, please cite the following resource: