Bright and photostable fluorescent labels are critical tools for the life sciences.  A key determinant of fluorophore performance is the quantum yield (QY); dyes with improved QY values are typically brighter and more photostable in biological assays.  At present, improvements to QY have required significant chemical modification to fluorophore structures.  However, these modifications can have a deleterious impact on molecular size and cell permeability. Thus, methods to improve QY using subtle changes in structure would yield fluorophores that enable new and improved experiments. 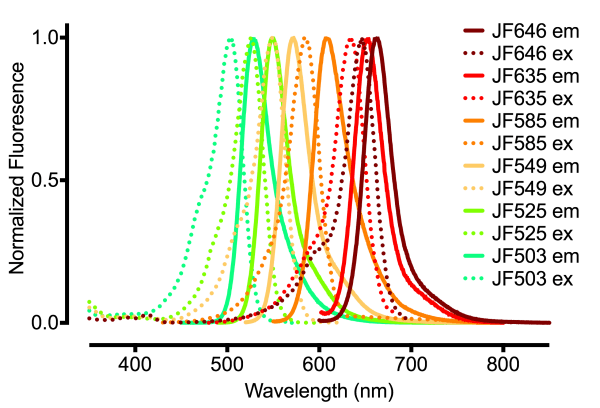 This innovation describes a novel and simple modification to improve the brightness of fluorescent dyes.  Replacement of an N, N‑dimethylamino group on a fluorophore with an azetidine constitutes a net addition of just a single carbon atom but greatly improves quantum yield and photostability.  For example, our tetramethylrhodamine (TMR) analog, Janelia Fluor®549 dye, is 2× brighter than TMR and Cy3 in vitro and live-cell experiments.  The facile modification is generalizable to red-shifted isologs of rhodamine dyes, yielding a panel of green-, orange-, and red-absorbing fluorophores.  These dyes show excellent cell permeability and compatibility with various labeling strategies, such as the HaloTag® and SnapTag® systems.  This enables sophisticated multicolor imaging experiments in living cells, such as single-molecule tracking and direct stochastical optical reconstruction microscopy (dSTORM).

This azetidine substitution is generalizable and has been applied to additional dye families to yield bright fluorophores with absorption maxima ranging from ultraviolet to infrared.  These improved Janelia Fluor® dyes should be of general utility for fluorescent labeling, imaging, and detection.

These dyes and patent rights are available for Commercial License for the full-color spectrum as well.

Lavis Lab
A general method to improve fluorophores for live-cell and single-molecule microscopy
Lavis Lab
Synthesis of Janelia Fluor HaloTag and SNAP-Tag Ligands and Their Use in Cellular Imaging Experiments.
janelia7_blocks-janelia7_tool_collaborators | block