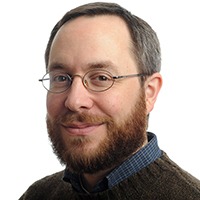 Since coming to Janelia in 2011, Adam has worked on a variety of data acquisition and analysis projects, including Spoke, Motr, Groundswell, JAABA, Muse, DataPro, and now WaveSurfer.

Before coming to Janelia, Adam completed a postdoc in Eve Marder's lab at Brandeis University, studying neuronal variability in crabs and lobsters. He has a PhD in Computer Science from UC San Diego, where he was co-advised by Bill Kristan and Gary Cottrell, and studied simple models of neuronal oscillation and command-like neurons in leeches. As an undergraduate, he studied Cognitive Science at MIT. When asked, he advises undergraduates to not get a degree in Cognitive Science.