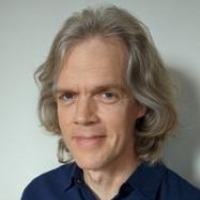 Ben is a software engineer in the Scientific Computing group. As such he develops data acquistion and analysis programs for Janelia's scientists.  Since coming to Janelia in March of 2012, he has worked on GENIE, WaveSurfer, MouseLight, Acoustic Segmenter, Omnivore, Courtship Song Recorder, and JAABA, among other projects.

Previously Ben was a post-doc and research associate at Cornell University in Ron Hoy's lab, where he studied acoustic communication in insects, including mosquitoes.  In graduate school he studied sound localization in barn owls with Mark Konishi, and designed analog VLSI models of audition with Carver Mead.  Ben's interest in hearing started in college when he was struck by the disparity between artificial speech recognition algorithms and the mammalian auditory pathway.  Prior to that he was a computer geek who learned to code at age thirteen.

Ben has a BS in Computer Science from Trinity University and a PhD in Computation and Neural Systems from Caltech.