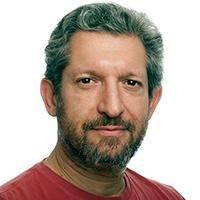 I am the custom software developer for the Applied Physics and Instrumentation Group (APIG) at Janelia, creating tools for instrument automation and for image and data analysis of many kinds. My graduate education is in particle physics where I worked on calibration and qualification of liquid argon calorimeter modules for the D-zero experiment at Fermilab—at a period when national lab funding was drying up. Unconvinced that was my future I got a job developing the Mac client for Network Scheduler II, a successful rival to Lotus Notes. The need to get MacWorld reviews and to coax snappy responsiveness from slow early computers was the impetus for my eternal quest: software that is both elegant and blazingly fast.

When CE software bought us out I started a company to write tools for Mac programming, and used those tools to produce successful shareware products {SmartDelete, DemoGod, MagicBullets, ArtValve,…}. I was featured in Wired Magazine because of ArtValve’s 150,000 users. Around 1998 Tim Harris recruited me into biotechnology by asking “wouldn’t you like to do something really important?” I accepted the job to design the software suite for the Praelux In-Cell 3000 live cell assay platform, which became quite popular. People taking data on competing platforms demanded converters to my tool set. In APIG we are still using those tools for everyday image analysis jobs.

After Praelux was bought by Amersham I moved to GSK, working on software for high-throughput lab-on-a-chip assays—bought by Eksigent. From there, I was recruited again by Tim to Helicos Biosciences to write a variety of tools for acquisition and analysis of DNA sequencing data. Now I am here at Janelia scoping out neuroscience applications that might benefit from elegance and high performance and finding that there are such opportunities.

Recently Completed
As part of APIG’s array tomography platform development team, Jennifer Colonell and I had automated an optical microscope to take hundreds of thousands of precisely focused images, monitor focus quality, and redo any unsatisfactory images—all unattended and in real time. Following that I worked on stitching tools to align the images into a virtual 3-D stack. I adopted software for EM alignment originally created here by Louis Scheffer. I expanded and generalized that to handle optical or EM stacks of billions of images. The work is now publicly available here: https://github.com/billkarsh.