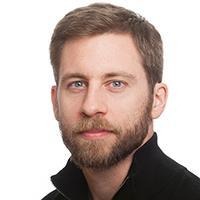 Eric received his undergraduate degree in chemistry from Truman State University in Missouri. During his Ph.D. work in Biological Chemistry with Catherine L. Drennan at the Massachusetts Institute of Technology, he worked on the molecular mechanism of nickel ion homeostasis in bacteria by solving x-ray crystal structures of the nickel-responsive transcription factor NikR. His postdoctoral work was with Richard T. Lee at Harvard Medical School and Brigham and Women’s Hospital in Boston studying metabolic signaling. He then had a faculty appointment at the University of Puerto Rico, Río Piedras Campus, where he worked on the molecular aspects of protein S-nitrosylation signaling. Eric came to Janelia as a Senior Scientist in order to prototype new protein-based tools for neurobiology.