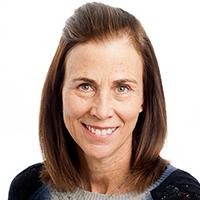 Not many people can say they’ve braved Wyoming’s wilderness – and even fewer can say they did so when they were teenagers. But as a senior in high school, the idea of scaling boulders, foraging for food, and eluding lumbering grizzly bears captured Jennifer Lippincott-Schwartz’s imagination. Her graduation gift was a wilderness training course culminating in a multiday survival test.

“You’re basically left in the mountains with three other people – no food – and you have five days to find your way back to the base,” Lippincott-Schwartz recalls. The trying excursion fueled her passion for the natural sciences.

Although she loved biology, Lippincott-Schwartz flirted with the humanities, earning degrees in philosophy and psychology at Swarthmore College. After graduating, she took time out to teach science and math in Africa. There, she fell back in love with science.

When Lippincott-Schwartz returned to the United States, she pursued a master’s degree in Philip Hanawalt’s lab at Stanford University, studying DNA repair. As she dug into the roles of repair enzymes, she couldn’t help but think, “I’m breaking cells apart to purify a single enzyme, but what about the entire system – how does the cell, as a whole, function?”

She followed her nose on that question while earning her PhD at Johns Hopkins University, in Douglas Fambrough’s lab. Her work focused on lysosomes, organelles responsible for the breakdown of unwanted proteins in cells. Using antibody targeting and fluorescence microscopy, Lippincott-Schwartz discovered the lysosomal-associated membrane protein, LGP120.

But it was during her postdoctoral work with Richard Klausner, at the National Institutes of Health (NIH), that things really took off. There, she coauthored 19 papers that included the identification of a surprising new protein degradation pathway in which the endoplasmic reticulum (ER) degrades entire proteins, and a retrograde pathway for protein trafficking from the Golgi back to the ER.

Lippincott-Schwartz stayed on at the NIH, as a primary investigator and chief of the Section on Organelle Biology in the Cell Biology and Metabolism Branch. Hoping to expand her research into live-cell imaging, she began searching for a way to tag proteins in live cells. Eventually her group created a photoactivatable form of green fluorescent protein (GFP), which allowed them to switch a tagged protein’s green glow on and off using flashes of light.

Her discovery led to a fruitful collaboration with physicists Eric Betzig and Harald Hess (now group leaders at Janelia), who proposed a new function for the photoactivatable protein. The scientists used the protein to generate photoactivatable fluorophores, or dyes, which enabled them to illuminate different sets of molecules sequentially, creating a microscope image far more detailed than previously possible. The method, called super-resolution microscopy, garnered Betzig the 2014 Nobel Prize in Chemistry.

In 2016, Lippincott-Schwartz moved her lab to Janelia, where she continues to investigate cell biology, but in the context of the brain. Her group studies neurobiology on a cellular level, looking into processes such as organelle trafficking and metabolism, to better understand how nerve cells communicate and behave in normal and diseased brain function.