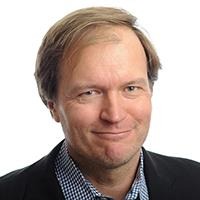 Karel Svoboda is a Group Leader at HHMI's Janelia Research Campus. His lab is working on the structure, function and plasticity of neocortical circuits, mostly in the context of somatosensation. He has a long-standing Interest in the development of optical, physiological and molecular methods for neuroscience. Svoboda received a BA in physics from Cornell University and a PhD in Biophysics from Harvard University. For his thesis work, with Steven Block and Howard Berg, he measured the molecular movements and forces of individual kinesin molecules, a molecular motor common to all eukaryotic cells. His postdoctoral work, with Winfried Denk and David Tank at Bell Labs, focused on synaptic and dendritic function in the cortex. From 1997 until 2006 he was a Professor at Cold Spring Harbor Laboratory and an HHMI Investigator. The cerebral cortex is the largest part of the mammalian brain and plays a role in most flexible behaviors. Neocortical circuits are remarkably similar across species, and to some extent also across functional areas. Our goal is to understand the principles that organize neocortical circuits and to decipher how they process information and guide behavior.The research program is mainly organized around the neural circuits that subserve whisker-dependent somatosensation in the mouse. We use a variety of anatomical, optical and electrophysiological methods to map the circuit diagram underlying somatosensation. Quantitative behavioral paradigms in head-fixed mice allow us to use reductionist methods to probe the dynamics of neurons and synapses in awake animals. For example, imaging activity in identified neuronal populations in the circuit can guide the development of hypotheses about the algorithms underlying sensory perception and behavior. These hypotheses can then be tested using subtle perturbations in genetically targeted neuronal populations.