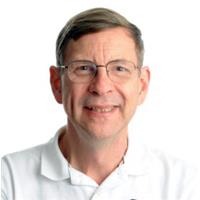 For more than two decades Louis Scheffer has been working to improve the design of microchips, figuring out how to connect hundreds of thousands of electronic transistors in a single device. At Janelia, he is now applying similar design principles to understand another type of “wiring”—the intricate interconnections that neurons make in the brain.

Neuroscientists want to map the flow of electrical signals in the brain to understand how it turns signals from the eyes into images, for example, or instructs arms and legs to move. But these neuronal circuits are difficult to map, especially when dealing with billions of neurons as in the human brain. For each neuron, researchers have to follow its long projections—the axons and dendrites—and determine which other neurons they connect with.

One way to accomplish the task is to take pictures of the neurons with powerful microscopes and visually follow their tortuous paths. To do so, tiny slices— 1/1000th the thickness of a human hair—of an organism’s brain are photographed with an electron microscope (EM). Images are then stacked on top of each other, and individual neurons and their connections are followed from one image to the next, often through thousands of layers of brain tissue. “You have to try to reconstruct three-dimensional images and see the connections from one neuron to another,” explains Scheffer.

Even when dealing with relatively small brains, like that of the fruit fly Drosophila melanogaster, generating a map of the brain’s wiring is a daunting task. Just to reconstruct the three-dimensional neuronal networks in the medulla—one of the brain regions that receives visual signals from the eyes—takes about 153,000 EM images. “That’s how many images you need to analyze to be able to study one part of the optic system, in one eye of one small fly,” says Scheffer.

To analyze each image from scratch would take researchers at least 10 hours. But researchers rely on computers to do a “first pass” analysis of the images. Then the researchers go back to “proofread” the computer’s interpretation, spending about one hour on each image. “We do the best job we can with the software available and then have to correct errors manually,” explains Scheffer. “The proofreading is the rate-limiting step.”

To cut down on proofreading time, Scheffer and others are trying to develop software to help computers perform the reconstruction step more accurately and efficiently. In particular, he wants to teach computers to recognize different types of neurons and the axons and dendrites shooting out of them. “Neuroscientists are good at identifying different neurons in EM images and determining which neurons are the same ones in different images,” says Scheffer. “We want to transfer this kind of knowledge into computer programs.”

At the Janelia campus, Scheffer says he has immediate access to neuroscientists who can test out his software as it is being developed. “They are right next door,” says Scheffer. “When it does not work, they come pounding on my door.”

An electrical engineer, Scheffer’s journey to Janelia was somewhat serendipitous. While planning a conference in Paris in 2004 that focused on interconnections in computers, one of his colleagues told him about the work of Janelia group leader Dmitri Chklovskii, who was studying interconnections in the brain. “I invited him to give a talk, and everyone thought it was really interesting,” say Scheffer. “So, I invited him to two other conferences, and then he invited me to talk at Janelia.”

Scheffer was immediately drawn to the multidisciplinary nature of Janelia. “I had never done research in biology, so the biology part of my work has been a steep learning curve. When people start talking about GAL4 and flip-out mutants, I have to stop and think,” says Scheffer. “But the software part is very similar to the software for engineering.”

His aim is to map all the neurons in the fly brain in the next five years. That may seem like an ambitious goal, but Scheffer is optimistic that it will get done. “When I started in the transistor field in 1981, it took me two years to build a chip with 15,000 transistors in it,” he explains. “By 2009, we had developed software that could help build a chip with 1 billion transistors in the same amount of time.” He is confident of seeing similar advances in researchers’ ability to map the brain’s functions.