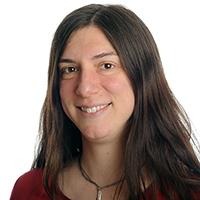 When it came time for university, Zlatic decided to pursue both linguistics and natural sciences. She obtained a full scholarship to Trinity College, University of Cambridge, where she earned a bachelor’s degree in neuroscience; at the same time she spent her summers pursuing a bachelor’s degree in linguistics and Russian at Zagreb University. And she still managed to find time for the stage. While she was at Cambridge, she starred in a number of Euripides and Sophocles tragedies, as well as in plays by Shakespeare, Racine, and others.

But Zlatic’s biggest passion is neuroscience. Fascinated by some of the most complex functions of the human brain, such as language, artistic expression, and communication, she became curious about the intricacies of the brains of different species. She became particularly intrigued by the simpler functions of the maggot brain—crawling in search of food, escaping from danger, exhibiting startle responses to novel stimuli, and “finding little holes to crawl into.” Today, in her lab at Janelia, Zlatic probes the neural and genetic basis of behavior in the larva of the fruit fly Drosophila.

Her interest in fly larva began in the last year of her Cambridge undergraduate degree, when Michael Bate’s lectures on the development of neural circuits in Drosophila prompted her to apply for a place as a PhD student in his lab. “I thought that understanding how the nervous system develops would be very important in understanding its function and the biological basis of behavior,” she says.

During her Ph.D. and postdoctoral research, Zlatic studied the development of different kinds of sensory neurons in the Drosophila embryo. As the nervous system forms, neurons produce processes—called axons and dendrites—that grow toward targeted locations. Once there, the tip of an axon stops growing, branches, and makes connections with another neuron’s dendrite, forming part of a circuit. Each of the main types of sensations—such as sight, sound, pain, and touch—is called a modality of sensation. Sensory neurons of different modalities send axons to a region of the ventral nerve cord specific to that type of sensation. Zlatic found that sensory axons of distinct modalities look for different “geographical locations” in the nervous system because they express different receptors for positional cues present in the larval embryonic nervous system. One such positional cue—a protein called Slit—controls how the axons of sensory neurons grow—and where they stop growing— along the animal’s mediolateral axis. Neurons of each sensory modality have their own set of Slit receptors on the surface of their axons.

Zlatic noticed that meddling with the system that guides axonal growth in one dimension does not affect growth in the other two. Thus, Slit controlled branching along the mediolateral axis, but not the dorsoventral axis. This discovery indicated that there should be positional cues in each of the three dimensions. Zlatic continued her investigations with Michael Bate and determined that proteins called Semaphorins control the branching of sensory axons along the dorsoventral axis.

For her PhD work, Zlatic was awarded the Junior Research Fellowship from Trinity College, and the Zoological Society of London gave her the Thomas Henry Huxley Award for the best PhD thesis of the year by a student attending a university in the United Kingdom.

Having become familiar with the development of the different kinds of sensory neurons in the Drosophila embryo, Zlatic felt it was time to start looking into how information received by the sensory neurons of distinct modalities is integrated by the brain and used to select specific motor outputs. So she decided to study larval behaviors that can be induced by stimulating mechanosensory (pressure, texture), nociceptive (pain), and proprioceptive (position of the body) neurons.

Zlatic opted to use a few years of her Trinity College fellowship abroad to obtain experience in other research environments. She went to the United States and worked in Wesley Grueber’s lab at Columbia University, and she spent time as a visiting scientist at Janelia, in Julie Simpson’s lab. During her visit to Janelia, Zlatic also worked with Rex Kerr, who helped her adapt his system for automated tracking of populations of worms to fly larvae. “So now I can do behavioral assays with populations of Drosophila,” Zlatic says. She so much enjoyed her time at Janelia as a visiting scientist that she decided to apply for a position there.

In her lab at Janelia, Zlatic will use behavioral assays to identify neurons involved in the processing and integration of mechanosensory, nociceptive, and proprioceptive stimuli. She will use genetic methods to selectively activate and inactivate one neuron class at a time and study how the larval nervous system recognizes particular patterns of sensory stimuli and selects specific reactions. “I want to know which neuron classes are participating, how they participate, and how they are genetically specified,” she explains.

In addition to genetically inactivating single classes of neurons and observing the behavioral effects, Zlatic will visualize the activities of those neurons in living larvae. “These new methods for observing and studying larval behavior in highly quantifiable ways in entire populations make the field ripe to ask exciting questions,” she says.