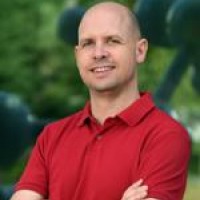 Stephan Preibisch joined HHMI Janelia in 2019 as Team Lead of Computational Methods, and is Director of Scientific Computing Software since 2021. His personal scientific focus lies on the reconstruction of large-scale electron and light microscopy datasets working closely with the Saalfeld lab, the Funke lab, the Svoboda lab, FlyEM, and CellMap. Stephan is a strong proponent of Open Science Software and is a co-founder of the HHMI Janelia Open Science Software Initative (OSSI).

Before joining HHMI Janelia, he was independent research group leader at the at the Berlin Institute of Medical Systems Biology of the Max Delbrück Center in Berlin, Germany from 2015-2021. His lab was focused on developing tools for lightsheet microscopy, single-molecule RNA imaging, spatial transcriptomics, image processing, was studying the regulation of developmental processes in C. elegans dauer and C. elegans embryogenesis.

In his early scientific career,  he received his master of computer science from the Technical University of Dresden in 2006 and developed tools for the correction of microarry data at the Interdisciplinary Center for Bioinformatics in Leipzig. He did his PhD at the Max Planck Institute of Molecular Biology and Genetics in Dresden where he developed algorithms and open source code for the reconstruction of lightsheet microscopy data. During his time as bioinformatics specialist at HHMI Janelia and HFSP fellow at the Albert Einstein College of Medicine (New York) and MPI-CBG (Dresden) he was developing a complete computational representation of C. elegans dauer exit using a combination of experimental and computational methods.

Stephan is experienced in computer science and biology, and focusses in particular on image analysis, software development, and has a long-standing interest in transcription-related assays and tools. He contributes to the open source projects Fiji, ImgLib2, BigDataViewer, BigStitcher, as well the spatial transcriptomics tools RS-FISH and STIM.