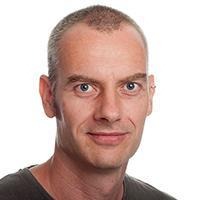 Stephan Saalfeld is a Group Leader at HHMI's Janelia Research Campus since December 2013.  Stephan's current research in image registration and interpretation aims at generating the highest quality reconstructions of biological nervous systems such as that of Drosophila melanogaster, coping with compromised data from complementary imaging modalities. To this end he collaborates, among many others, with the labs of Davi Bock, Richard Fetter, Albert Cardona, Harald Hess, Pavel Tomančák, and Gene Myers.

Stephan is an experienced software designer and developer with particular focus on image analysis and web-applications. He contributes to the open source projects ImgLib2, CATMAID, Fiji, and TrakEM2.  From 2002–2008, he was co-founder and member of the free-lance developer network phenomene.de, where he developed commercial web-applications.

Left: Convolution of our predictions (FAFB) with a smooth PSF reproduces synaptic densities as visualized by fluorescent microscopy with the the nc82 antibody (JFRC2 template brain), scale bar 50um. Right: Examplary zoom-series into our synaptic cleft predictions overlayed over the FAFB volume.