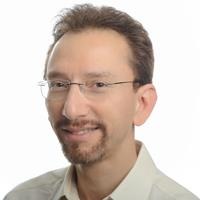 Bill works on the FlyEM team to improve data management and visualization of the brain reconstructions. After noting data management issues during early research at Janelia, he built DVID, a Connectomics data platform that allows branched versioning and flexible storage through a web (HTTP) interface.​ His work interests include deep learning and sparse volume visualization using advanced ray tracing and compact data structures.

Bill has worked at the junction of biomedical and computer sciences for a while.  He was a coterm BS/MS student in biological and computer sciences at Stanford.  Under the Medical Scientist Training Program at UVa, his research on segmentation and visualization of human brains was incorporated into one of the first 3D neurosurgical planning systems.  After graduation, Bill joined his mentor and some friends to start a software company that pioneered 3D prostate brachytherapy planning, eventually getting acquired by Varian Medical Systems.  Just before landing at Janelia, Bill was an entrepreneur in Silicon Valley and developed cardiovascular simulation and visualization software at Stanford's NIH Center for Biomedical Computation.