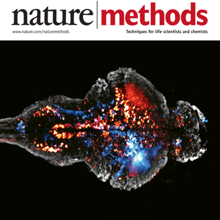 Brain function relies on communication between large populations of neurons across multiple brain areas, a full understanding of which would require knowledge of the time-varying activity of all neurons in the central nervous system. Here we use light-sheet microscopy to record activity, reported through the genetically encoded calcium indicator GCaMP5G, from the entire volume of the brain of the larval zebrafish in vivo at 0.8 Hz, capturing more than 80% of all neurons at single-cell resolution. Demonstrating how this technique can be used to reveal functionally defined circuits across the brain, we identify two populations of neurons with correlated activity patterns. One circuit consists of hindbrain neurons functionally coupled to spinal cord neuropil. The other consists of an anatomically symmetric population in the anterior hindbrain, with activity in the left and right halves oscillating in antiphase, on a timescale of 20 s, and coupled to equally slow oscillations in the inferior olive.