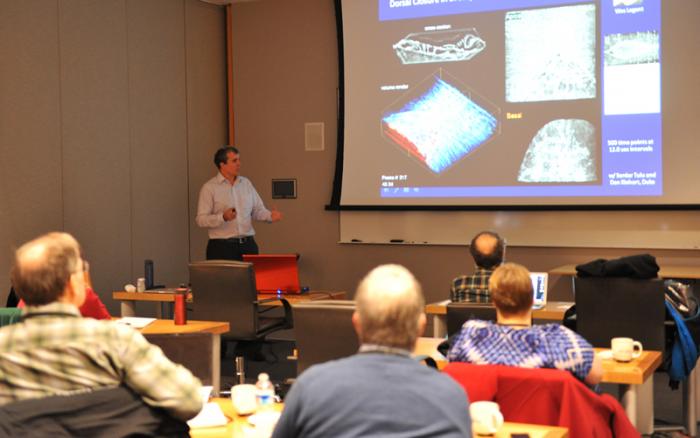 Our Director's Seminar Series brings prominent researchers to Janelia, often with the opportunity for our researchers to meet with them personally. Held 4-6 times per year, these are talks by distinguished guests, and are hosted by the Executive Director. Recent lectures include:

On most Thursday afternoons, Janelians gather in our Auditorium to listen to talks from their colleagues. Each lab and project team is scheduled to give an internal seminar once per year, giving everyone at Janelia a chance to hear about the work they are doing. Recent topics include:

Janelia hosts 8-9 "Science for Everybody" seminars each year. These talks are given by Group Leaders and other senior scientists and bring all Janelians, including scientific and operations staff, together. Sample talks include:

Janelia hosts numerous other informal talks and seminars frequently throughout the year. These include, but are not limited to, job candidate talks, Janelia Professional Enrichment program talks, journal club and special interest group speakers, and visitor program and student program seminars, and our Dialogues of Discovery public lecture series.

Janelia conferences attract nearly a thousand top researchers from around the world each year; all participants are expected to contribute to the intellectual content of the meeting by presenting their work.