A Window on Cell Death

Approximately 100 billion cells in a human body die each day through a controlled process called apoptosis. During apoptosis, the cell’s mitochondria – organelles that produce energy – release their DNA into the cytoplasm, which triggers an immune response, as if the cell were infected by a virus. Fortunately, this response is held in check by molecules called caspases. 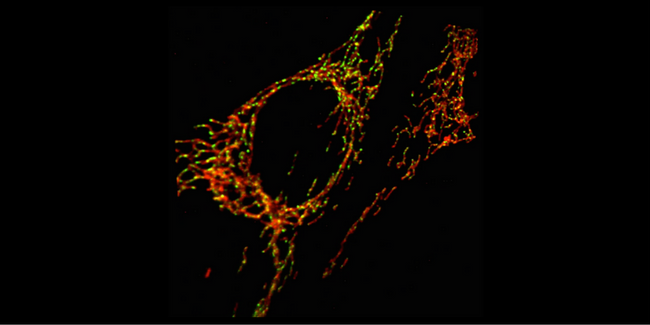 Kile and his research team are interested in identifying the molecular events underlying this apoptotic immune response. Kate McArthur, a grad student in Kile’s lab, had done genetic and pharmacological studies to understand the process. But that wasn’t enough; what she really wanted was to look inside a dying cell. She turned to confocal studies, but the confocal microscope produced only static images. “We wanted to actually see the process happening,” she explains.

When Janelia group leader Eric Betzig’s Science paper appeared in 2014, McArthur realized that the lattice light sheet microscope at Janelia’s Advanced Imaging Center (AIC), with its particularly gentle treatment of live cells, might be exactly what she needed. Kile and McArthur submitted a successful proposal to use the microscope, and McArthur has since visited twice. “The data we got was just incredible,” she says. In three weeks, she collected 30 terabytes of data.

“Actually seeing what was going on has transformed my understanding,” says Kile. “Seeing it has opened up so many possibilities in terms of new questions and new approaches, and we are totally captivated. It’s been an absolute revelation, scientifically.”

“At first it was sort of a pipe dream – like, wouldn’t it be cool to build this thing?” says Lachlan Whitehead, an optical physicist at WEHI. “We just didn’t know if we had the know-how to do it. But after the workshop, I saw that this was feasible for us.” The first challenge in building their own lattice microscope was convincing their colleagues that do-it-yourself was the best way forward. “This kind of ground up approach is not something we have done before”, explains Kelly Rogers, head of imaging at WEHI. But Eric Betzig’s team “has been so open and so generous,” she says, that it’s been possible for the WEHI team to take it on. “It’s the free dissemination of the technology and the science – that generosity, it just blows me away,” says Kile.

Although he wasn’t previously “an imaging person,” Kile admits, he has now become “a shameless advocate” for imaging. “I’ve had a conversion and I’m now an apostle of the AIC,” he says. Building the lattice represents a “huge step forward” for WEHI, which traditionally hasn’t been focused on imaging. “This is part of a deliberate strategy to become not just a place where a little bit of imaging happens on the side, but a place where imaging is embedded in our science. And we’re doing cutting-edge experiments,” says Kile. 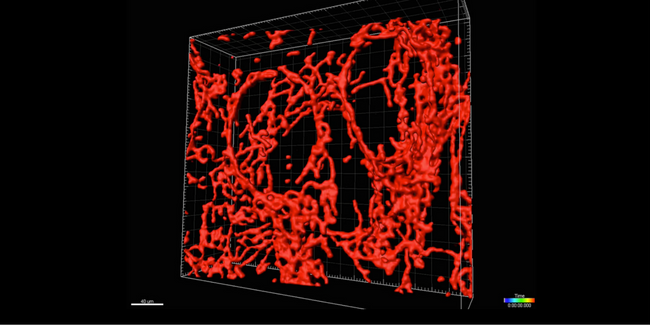 This 3-dimensional representation of mitochondria was reconstructed from stacks of images taken with the lattice light sheet microscope. The researchers used 3-D reconstruction software, called Imaris, to trace the outline of the mitochondria on each image slice, and then connect the slices to form the 3-dimensional structure. Credit: Kile Lab

Collaboration between labs, project teams, support teams, and scientists at other institutions is an essential part of the culture and intellectual life at Janelia.