We use molecular genetic techniques to study the function of neural circuits in Drosophila. Our goal is to understand how information processing in defined neural circuits generates complex animal behaviours. As a model system, we focus on the fly’s mating behaviours. These behaviours are robust, adaptive, and particularly amenable to genetic analysis.

A major goal for neuroscience is to understand how information processing in neural circuits guides animal behaviour. At any given moment, the brain receives a rich set of sensory inputs, from both external and internal sources.

This information must be integrated, interpreted in the light of knowledge gained through prior experience, and a specific behavioural action selected. These processes of sensory integration, learning and memory, decision making, and action selection are the essence of animal cognition and behaviour. Our goal is to provide a biophysical explanation for these processes.

As a model, we have chosen to study the sex life of the fruit fly Drosophila melanogaster. During mating, flies make decisions that are critical for their reproductive success, and hence their evolutionary fitness. Upon encountering another fly, a male decides whether or not to court, based on the current sensory input and his past experience. If he does court, the female then decides whether to accept or reject him, based on her perception of his quality as a potential mate, and her own sexual maturity and mating status. These are complex decisions made by complex brains, but working with flies has the great advantage that genetic tools can be used to identify and manipulate the relevant neurons and circuits in the brain. With these tools, it should be possible to establish causal relationships between genes, cellular biochemistry, circuit function, and animal behaviour. 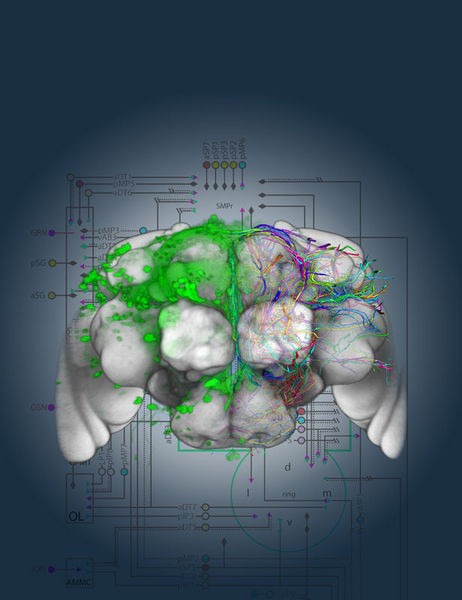 Remarkably, the different behaviours of male and female flies can largely be explained by the sex-specific splicing of a single gene – fruitless (fru). If females are forced to express male-specific fruM transcripts, they behave like males. Conversely, males that lack fruM behave like females.

fru is expressed in some 2000 neurons, distributed in clusters throughout the nervous system (Fig. 1). The activity of these neurons is essential for courtship behaviour. We have recently developed genetic tools that provide specific access to distinct subsets of fru neurons, so that we can selectively express visible markers in these cells to trace out their anatomy and connectivity, or various proteins that measure or modulate neuronal activity and allow us to study circuit function (Fig. 2). Using this genetic toolkit, we have constructed a cellular resolution wiring diagram of the entire fru circuit (Fig. 3) Now, we can begin to examine what each of type of fru neuron contributes to courtship, the nature of the signals it processes, and how and to what extent sexually dimorphic processing leads to the distinct behaviours of males and females. We have started this analysis with an analysis of the circuitry for courtship song, the pheromone processing pathways that feed into these song circuits, and the circuitry allows the male with to learn which type of female is most likely to be wooed by his song. 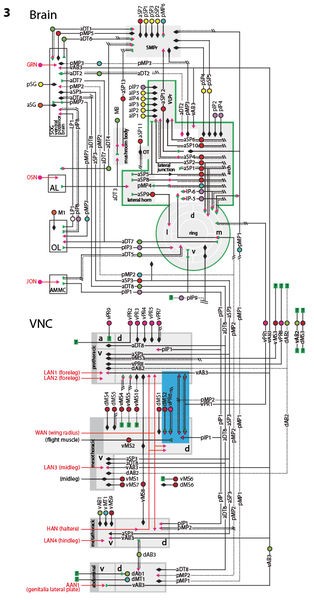 We are also currently examining the sensory pathways that process and integrate the two male signals that influence the female’s mating decision: his courtship song and his pheromone profile. A third important factor in the female’s decision is her own mating status. Females that have recently mated are usually reluctant to do so again. This is due to a small peptide, called the sex peptide (SP), that is present in the first male’s seminal fluid. We have recently identified a molecular receptor for SP, a G-protein coupled receptor we call SPR (sex peptide receptor), and shown that it acts in a small subset of fru+ sensory neurons that innervate the reproductive tract and project axons into the central nervous system. Our ongoing efforts are aimed at understanding what SP does to these neurons, and to characterise the neural pathways in the brain that further process this signal – ultimately integrating it with the song and pheromone signals to guide the female’s mating decision.