The focus of the lab is the neural basis of spatial learning and memory in rodents, which includes processes such as how an animal learns the overall spatial layout of an environment, where resources such as food or water are located, and how to return to those specific locations later.  What patterns of brain activity underlie such computations?  This is a rich topic that promises to provide fundamental insights into the foundations of higher cognitive functions.

The hippocampus is a brain region that has been shown to be crucial for both spatial learning and behavior in rodents and the formation of episodic memories (i.e., memories of events from daily life) in humans.  Electrophysiological recordings have revealed that when a rodent explores a space, individual hippocampal neurons display clear evidence of spatial processing.  Each such neuron is called a place cell, since it fires selectively whenever the animal is in particular locations (called the place fields of the cell) within an environment.  Different place cells have place fields in different locations and the place fields from across the set of place cells collectively cover the entire environment.  Therefore, the set of place cells provides the animal with a spatial map of the environment that can be used to tell the animal where it currently is.  Also, recordings from the human hippocampus have revealed neurons that fire in a highly specific manner for familiar people and objects (Quiroga et al. 2005), similarly to how place cells fire at specific locations, thus adding support to the study of rodent place cells as an animal model of human hippocampal-dependent memory. 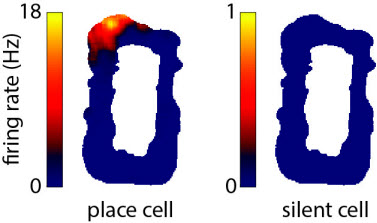 Multielectrode extracellular recording methods (Wilson and McNaughton 1993) allow us to follow the simultaneous activity of many neurons from several brain areas for weeks as an animal learns and then retrieves specific memories.  In vivo whole-cell recording in freely moving rats, a technique that I developed with Professor Michael Brecht and Dr. Jérôme Epsztein in Dr. Brecht’s laboratory, provides us with the ability to measure and manipulate a single neuron with exceptional precision as an animal engages in spatial behaviors (Lee et al. 2006, Lee et al. 2009).  We demonstrated that it was possible to obtain high-quality whole-cell recordings of remarkable stability lasting for up to an hour in freely moving animals (Lee et al. 2006); however, success rates were low.  Therefore, a major focus of my lab at Janelia has been the further development of this technique.  This work has resulted in a greatly increased success rate (Lee et al. 2014).  Furthermore, we have expanded the method so that freely moving whole-cell recordings can be obtained in mice as well as rats, and can be obtained in animals that are awake and fixed in place then released for unrestrained behavior (Lee et al. 2014).  These advances allow for a wide range of cellular/synaptic studies of identified neurons during natural behaviors, thus more directly linking in vitro and in vivo research.

Whole-cell recording of a hippocampal CA1 pyramidal neuron from a freely moving rat.  Recording was obtained in an awake head-fixed animal that was then released for unrestrained behavior.  From Lee et al. 2014.

In one line of work, we applied freely moving whole-cell recording to study the cellular mechanisms underlying place cells.  We focused on the most basic feature of a place cell—the existence of a place field.  This is because a substantial fraction (often half or more) of hippocampal pyramidal neurons has no place field in a given environment.  Such cells are called silent cells because they fire few or no spikes across the environment, though cells that are silent in one environment can be place cells in another environment and vice versa.  We thus investigated why a particular cell would either have a place field in a given environment or remain silent.  Whole-cell intracellular methods allowed us to measure both the inputs coming into the cell (by recording the subthreshold membrane potential) as well as the cellular excitability of the neuron (e.g. by determining the spike threshold and responses to probe stimuli) while the animal explored the environment.  Basic models of receptive fields would predict that place cells display larger spatially tuned inputs than silent cells, and this was what we observed; but surprisingly place cells were also more intrinsically excitable than silent cells (Epsztein et al. 2011).  Therefore, we tested the role of excitability differences by artificially increasing the excitability of silent cells via whole-cell current injection during behavior.  Unexpectedly, we found this manipulation unmasked spatially tuned inputs into silent cells and converted them into place cells (Lee et al. 2012).  This indicated that cellular properties can play a decisive role in the origin of place cells by gating the inputs into hippocampal neurons. 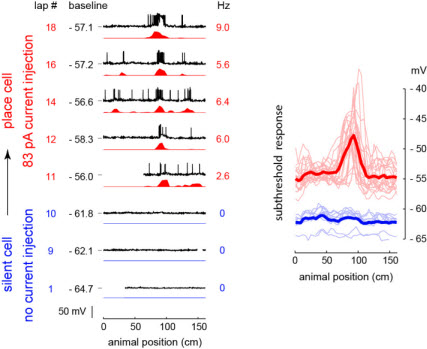 Whole cell recording of a hippocampal CA1 silent cell from a freely moving rat that was converted into a place cell by artificially increasing the cell’s excitability via single-cell injection of a constant depolarizing current (left).  The subthreshold response of this cell shows that this conversion was due to the unmasking of spatially tuned inputs into the cell (right).  Also, the image at the top of the page shows the anatomy of this CA1 pyramidal cell, which was filled during recording and histologically recovered afterwards.  From Lee et al. 2012.

The statistical structure of the spatial map

In another line of work, we applied extracellular methods to mathematically describe the rules governing the structure of new spatial maps, which has implications for how individual locations and different environments are encoded and recalled.  Previous work had indicated a strong degree of randomness underlying which cells were place cells versus silent cells in a given environment as well as where the place fields of each place cell were located.  Therefore, we had rats explore a very large environment (a 48-meter-long track) in order to facilitate statistical analyses of these features.  We found that a simple, 2-parameter stochastic model could closely account for the observed structure of the spatial map.  Briefly, each hippocampal pyramidal neuron could be modeled as having a cell-specific propensity for randomly forming a field in any given location, and the different propensities across neurons could be described by a particular distribution in which fewer neurons had higher propensities and more neurons had lower propensities of field formation (Rich et al. 2014).  What could be the advantages of this structure?  One feature is a potentially simple way to encode and recall individual locations: cells with a low propensity for forming fields would tend to have only a single place field (if it had one at all) regardless of environment size, and thus the firing of each such cell would directly represent a location.  Another feature involves how different environments of a wide range of sizes are encoded: cells with a higher propensity for forming fields would in essence be matched to represent smaller environments, and those with a lower propensity matched to represent larger environments, and together the distribution of propensities would mean that the hippocampus is ready to represent any sized space the animal encounters. 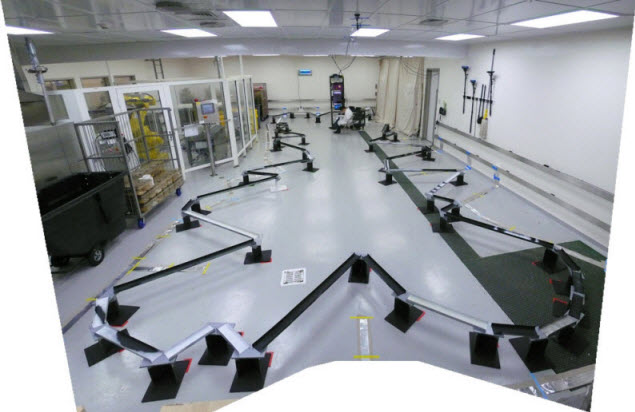 48-meter-long track used to study the large-scale statistical structure of place fields across a population of hippocampal neurons.  From Rich et al. 2014.

Ultimately, hippocampal spatial learning serves the survival needs of the animal.  Learning where to successfully obtain rewards such as food or water and how to get there are key parts of this.  We use extracellular recording of populations of neurons from hippocampal and reward-related brain areas as a rodent performs such tasks to search for potentially relevant neural correlates of these processes.  Methods for activating and inactivating specific brain regions or cell types can then be used to test the actual roles of these targets.  Understanding how rodents solve complex tasks like these is a clear challenge, and the development of more powerful techniques for monitoring and manipulating neurons is likely to be of critical value.  Janelia provides an ideal environment for developing and employing new techniques for neuroscience through its excellent infrastructure and support, stated research goals, and array of highly talented scientists.