Primary cilia, an often overlooked, hair-like organelle on the cell surface, could play a key role in how cells communicate long-term changes. 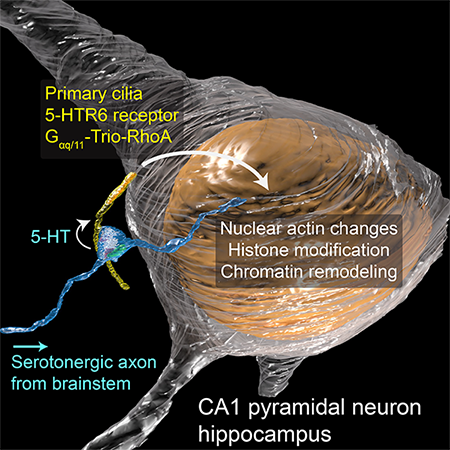 Scientists at HHMI’s Janelia Research Campus have discovered a new kind of synapse in the tiny hairs on the surface of neurons.

The commonly overlooked protrusions called primary cilia contain special junctions that act as a shortcut for sending signals quickly and directly to the cell’s nucleus, inducing changes to the cell’s chromatin that forms chromosomes.

“This special synapse represents a way to change what is being transcribed or made in the nucleus, and that changes whole programs,” says Janelia Senior Group Leader David Clapham, whose team led the new research published September 1 in Cell. The effects in the cell are not just short-term, he adds – some can be long-term. “It is like a new dock on a cell that gives express access to chromatin changes, and that is very important because chromatin changes so many aspects of the cell.”

Synapses are well-known to occur between the axon of one neuron and the dendrites of other neurons, but had never been observed between the neuron’s axon and the primary cilium. Janelia’s high-resolution microscopes and innovative tools enabled the researchers to peer deep into the cell and cilia to observe the synapse, the signaling cascade inside the cell, and the changes in the nucleus.

The discovery of the ciliary synapse could help scientists better understand how long-term changes in cells are communicated. The cilia, which extend from the cell’s interior, near the nucleus, to the exterior, could provide a faster and more selective way for cells to carry out these long-term changes, Clapham says.

“This was all about seeing – and Janelia enables us to see like we couldn’t see before,” Clapham says. “It opens up a lot of possibilities we hadn’t thought of.”

Nearly every cell in our body has a single primary cilium, which is likely a vestige from our unicellular ancestors. Sporting signal-detecting receptors, cilia play an important role in cell division during development. Some cilia, such as those in our lungs or the tail on a sperm, also serve important functions later in life.

However, it was unclear why other cells in our bodies, including neurons, retained this hair-like, bacterium-sized protrusion into maturity. Scientists had largely ignored these cilia because they were difficult to see with traditional imaging techniques. But recently, better imaging tools have sparked an interest in these tiny appendages.

Shu-Hsien Sheu, a senior scientist at Janelia and first author of the new study, admits that, even though trained as a neuroscientist and neuropathologist, he only learned about cilia on neurons as a postdoc in the Clapham Lab. Intrigued, Sheu decided to take a better look at the organelle in brain tissue, to see what he might learn.

Sheu used his expertise in focused ion beam-scanning electron microscopy, or FIB-SEM, to get a good look at the cilia. The high-powered microscope allowed the team to see that there was a connection, or synapse, between the neuron’s axon and the cilium protruding outside the cell body. The structural features of these connections resemble those found in known synapses, leading the team to call these connections the “axon-cilium” synapse or “axo-ciliary” synapse.

Next, the team developed new biosensors and chemical tools to study the function of this newly discovered structure. The researchers also used an emerging imaging modality – fluorescence lifetime imaging (FLIM) – to make better measurements of biochemical events inside the cilia. “I learned FLIM during the pandemic to address some of the technical challenges. It turned out to be a game changer,” Sheu says.

With these tools, the team was able to show step-by-step how the neurotransmitter serotonin is released from the axon onto receptors on the cilia. This triggers a signaling cascade that opens the chromatin structure and allows changes to genomic material in the cell’s nucleus. “Function is what makes static structures come alive,” Sheu says. “Once we were confident about the structural finding, we looked deeply into its functional properties.”

Sheu says HHMI’s curiosity-driven research philosophy enabled the discovery, which may not have been possible in a traditional research setting. “This is a good example of how we are able to make observations into discoveries,” he says.

Because the signals passed across the ciliary synapse enable changes to genomic material in the nucleus, they are likely responsible for longer-term changes in neurons than signals passed from axons to dendrites, say the researchers. These changes could last anywhere from hours to days to years, depending on the proteins the chromatin encodes.

The new research specifically looked at receptors for serotonin, a neurotransmitter widespread in the brain that plays an important role in alertness, memory, and fear. There are at least seven to 10 other receptors on cilia for different neurotransmitters that will now need to be examined. Cilia on other cells beyond the brain, like the liver and kidney, also deserve a closer look.

Down the line, a better understanding of the role of these ciliary synapses and receptors could help scientists develop more selective medications. Drugs that target serotonin transporters are used to treat depression, while serotonin is also linked to our sleep-wake cycle.

“Everything we learn about biology may be useful for people to lead better lives,” Clapham says. “If you can figure out how biology works, you can fix things.”