In his lab at Brandeis University, Nelson had found a way to hand-isolate groups of similar cells from the mouse brain, then analyze the RNA they produced. It was a way to profile those cells collectively and gain clues about what their role in the brain might be. As he honed the technique, he wanted to profile mouse neurons on a bigger scale than what was possible in his lab alone.

Meanwhile, at the Howard Hughes Medical Institute’s Janelia Research Campus, researchers were pursuing similar questions – and they were interested in Nelson’s technique. “An advantage of Janelia is science at scale,” says Janelia physiologist Adam Hantman. It was the perfect place to make Nelson’s project happen. 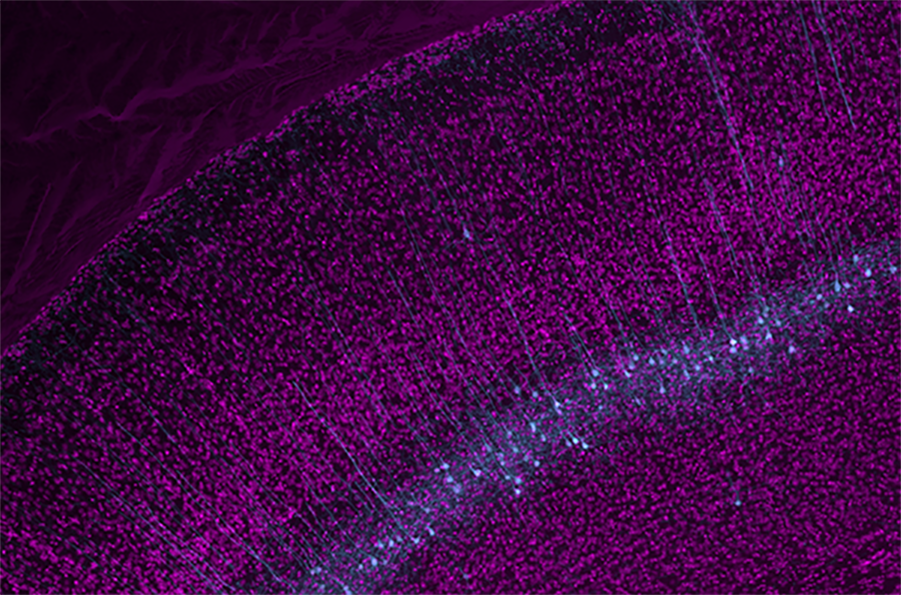 Over time, a collaboration grew between Hantman and Nelson through Janelia’s Visiting Scientist Program and expanded into a bigger project team with its own dedicated scientific staff. Project teams bring together interdisciplinary groups of scientists and engineers to tackle problems that are too big for a single lab to address. This project team, dubbed NeuroSeq, created an online field guide to mouse neurons that catalogues differences in gene expression between about 200 types of brain cells. The project team’s final results were published in May in eLife.

“It is really a great success story of Janelia’s visiting scientist program,” says Nelson Spruston, senior director of scientific programs at Janelia. “This was grassroots effort that began as a project in a lab at Brandeis and grew into something bigger at Janelia.”

NeuroSeq defined types of neurons by genetic characteristics as well as their location in the brain. The team used a set of genetic markers widely used by other labs so that other scientists can easily isolate the same subsets of neurons.

In addition to creating a resource for other scientists, the project also began to answer bigger questions in neuroscience, like what distinguishes types of neurons, Hantman says. After measuring a couple hundred different populations of cells, “we started to see these more general rules of what makes a cell type.”

The NeuroSeq project team identified two classes of genes that were especially important in distinguishing between types of neurons. Homeobox genes, which control development, and a group of longer-than-average genes that often code for proteins such as ion channels and receptors showed particularly stark differences between the different categories of neurons surveyed.

The project also led to the creation of the Quantitative Genomics support team, which uses the tools honed via NeuroSeq to serve the broader Janelia community. Anyone at Janelia can send samples to an in-house center staffed by experts in an array of genomic techniques, who will handle both careful sample preparation and the actual DNA or RNA sequencing.

For instance, while there are quick automated methods to sort cells to study their RNA, Nelson’s hand-sorting technique ensured that NeuroSeq scientists only collected data from healthy, living cells. It’s a painstaking and time-consuming process, says Andrew Lemire, a NeuroSeq project scientist who now leads the Quantitative Genomics support team. “Before, labs had to do that prep work themselves. Now, they can get help from our team.”

The Quantitative Genomics team has also expanded on the techniques honed by Neuroseq. The original project team collected and analyzed RNA from pools of neurons, a strategy that makes it easier to detect genes that are active at very low levels. Now, a different approach – analyzing RNA from individual neurons – has become more popular, and scientists on the Quantitative Genomics team have modified the hand-sorting technique to work with single-cell RNA sequencing.